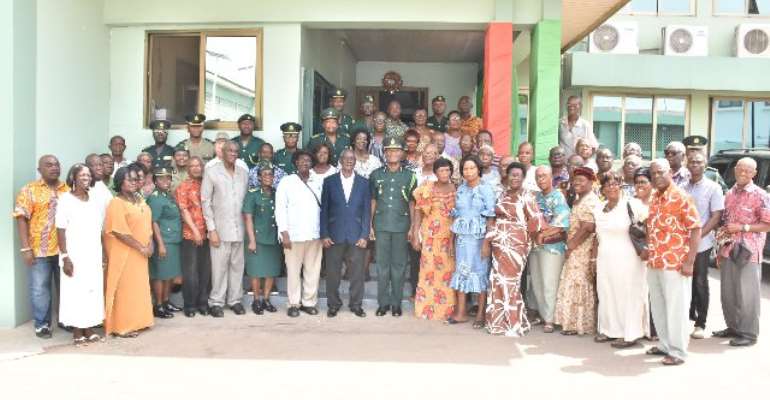 Elected executives of the Association of Retired Immigration Officers have been inducted into office.

The new executives were inducted by a retired Deputy Director of Immigration in charge of Operation, K. Hodari Okae, at a ceremony at the National Headquarters of the Ghana Immigration Service (GIS).

The Chairperson of ARIO thanked the outgoing executives for their contributions to the growth of the Association.

He expressed gratitude for the opportunity to lead the ARIO, pledging to work towards making the association more appealing and attractive to would-be retired officers of the Ghana Immigration Service (GIS).

He called for a consultative committee to comprise reps from the association and the Service to share ideas and enable the retirees to transfer the knowledge and expertise acquired over the years to serving officers.

Mr Gyamfi implored the Service to assist the association to bring together all retired officers and also help to establish a good welfare system for the retirees.

He called for active participation of all members of the Association and to have interest in the affairs of the Service, adding: “once an officer, always an officer, and so, whatever affects the Service should be of great concern to us all.”

A member of Council of State and a former Inspector General of Police, Nana Owusu Nsiah who was the Chairman for the occasion, urged the retirees to remain faithful to the course of creating a sense of belonging among themselves and to be good ambassadors of the Service.

Nana Owusu Nsiah who is also a former Director of Immigration counselled authorities of the GIS to put a premium on the welfare of Service personnel. This he said was the surest way of getting absolute commitment and loyalty from officers towards the delivering of excellence in security and migration for national development.

On his part, the Comptroller-General of Immigration (CGI), Kwame Asuah Takyi, who was the Special Guest for the occasion, commended members of ARIO for the effort of bringing together the retirees of GIS.

He noted that everyone would surely go on retirement, and explained that there was the need to put measures in place to make the association more attractive to serving officers to join when they retire. “Certainly, where there is an entrance, there is an exit” he added.

He admonished the members to eschew all forms of tribal differences and divisive tendencies and urged them to be each other’s keeper. “Let love and sense of cohesion abound among us and have the interest of the Service at heart and protect its image including those in authority,” he noted.

Mr Takyi pledged GIS’ support of GH¢10,000 as seed money for the association and an office by the end of February this year.