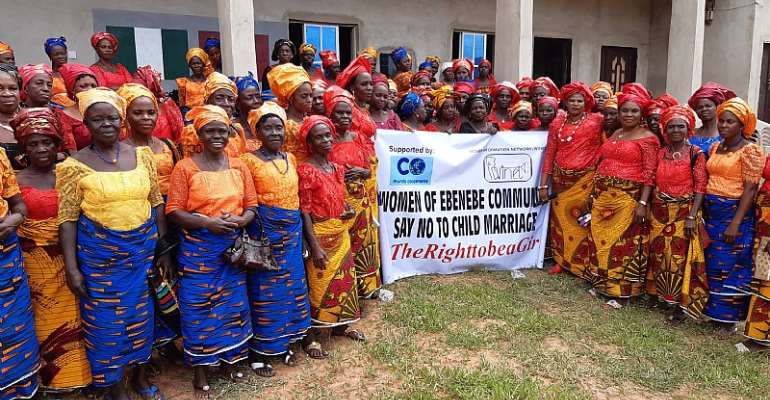 Ebenebe in Awka North LGA of Anambra State was once among the communities in Nigeria where forced and child marriages were customarily accepted despite being prohibited extant laws. It was however, unanimously abolished on 31st December, 2019, following series of sensitisation dialogues and meetings with various organs of the community, powered by Women Information Network (WINET), a Non-Governmental Organization based in Enugu.

OKECHUKWU ONUEGBU writes on the genesis to the revelation of the practice and how it had impacted on them positively and negatively.

Several years back when teenage and unmarried pregnancy was on the rise at Ebenebe, an agrarian community in Awka North Local Government Area of Anambra State, the people reportedly devised various means of checkmating the unfortunate incident. Prominent among the measures was that whoever impregnates a girl must either marry her or pay a fine of N10,000 (Imani ara) if he was not ready to take her as his bride.

When this was abused by some especially the affluent members of the society, the community adopted a more severe measure called “Tum, Num” or “Ituba m ime inuba m” loosely translates as “You must marry me once you impregnated me.”

Under this cultural practice, whoever impregnates a girl must marry her irrespective of his or her age, financial status, religion, ethnic or social origin, health condition and so on. Although few flouted the practice, most families married off their impregnated daughters to men who ‘committed the act’ without seeking their consent.

Investigations also show that there were instances where impregnated girls who failed to identify their men responsible including those whose lovers denied having affairs with or both families for any ‘cogent’ reason refused to take them as brides, were forced to marry other men of any age and status, who reached agreements with the girls’ parents.

It was learned that despite this practice, teenage and unmarried pregnancy persists in the community. It was also gathered that this kind of marriage hardly lasts as it breeds abortion, out of school syndrome, divorce, stillbirths, maternal mortality, diseases, domestic violence, poverty, deaths, among others.

The law which prohibits all traditional and cultural practices that violate the rights of the child and criminalises them also incorporates the basic principles of the Child’s Rights Act (CRA), United Nations Convention on the Rights of the Child (CRC), the African Charter on the Rights and Welfare of the Child (African Charter 1990), the Labour Act Cap 198 of LFN 1990 and Chapter IV of the 1999 Constitution of the Federal Republic of Nigeria as amended.

Section 23 to 24 of it provided that “No person under the age of 18 years is capable of contracting a valid marriage, and accordingly, a marriage so contracted is null and void and of no effect. No parent, guardian or any person shall betroth a child to any person. A betrothal in contravention of subsection (1) of this section is null and void.”

In section 25 of same law, a person who marries a child, to whom a child is betrothed, who promotes the marriage of a child or who betroths a child commits an offence and is liable on conviction to a fine of N500,000 or imprisonment for a term of five years or to both such fine and imprisonment.

As a result, in 2016 when the Women Information Network (WINET), Enugu got wind of the practice in Ebenebe, they conducted a baseline study to ascertain the veracity of the claims and probably save the food basket of Awka North from its attedaby adverse effects.

The Executive Director of WINET, Mrs Miriam Menkiti, said the study which employed Focused Group Discussion (FGD) and In-depth interview and was subsequently published in 2017, established that truly, child and forced marriages were culturally accepted by all the eight villages of the community.

Menkiti explained that “Child marriage is a marriage contracted between a man and a young girl aged between 12 and 17 years. The community also has a cultural belief which emphasises that no unmarried girl should have a baby while living with her parents. So, girls who get pregnant are forced into marriage. The study identified culture, poverty and greed as some of the causes of child and forced marriages.”

A respondent in the published report said “Yes, we, the parents always force our pregnant daughters to get married to the person that got them pregnant. At times a girl is forced to get married to any man even if the person is as old as her father because it is not in our culture for a girl to give birth at her parents home.”

“Some girls are forced by their boyfriends to constipate with them and when they get pregnant, their parents or uncles instead of allowing them to nurse the babies after which they will go back to school, force them to marry the men or other men who they do not like,” a teenage respondent added in the report.

The traditional ruler of the community retorted in the publication, “As the traditional ruler of the community, I have to intervene in some cases of teenage pregnancy. There was one that the mother wanted to force to marry but she refused. She came to me and I called the parents, I advised the parents that they should not force her into child marriage. Today, the girl is a third-year undergraduate in the university of Calabar.”

Following the discovery, WINET, sponsored by a Spanish NGO, Mundo Cooperante, launched a campaign entitled "the Right to be a Girl", solely to sensitise the community on the need to abolish the practice, as at it was at variance with the provisions of Anambra State Child Rights Law, and Child's Rights Act of the Federal Republic of Nigeria.

“WINET in 2019 carried out sensitisation dialogues with different segments of the community including the youths, the girls, the men and the women, where they all released their commitment towards ending teenage marriages,” WINET Executive Director disclosed.

The efforts seemed to have paid off as the traditional ruler of Ebenebe, Igwe Christopher Emeka Nnaegbuna, on an occasion of the community’s cultural fiesta (Ebenebe Day), held on December 31st, 2019 proclaimed the practice abolished.

Speaking on the occasion, Igwe Nnaegbuna said “Ebenebe like every community has customs, rules and regulations which are not above the laws governing Anambra state and constitutions of Nigeria. Therefore, we cannot observe any practice that is against extant laws of the country. We have seen that under aged marriage impact negatively on people and society individually and collectively. It leads to diseases, stillbirths and deaths.”

The monarch, while also proscribing cultism and other forms of atrocities in the community, charged parents and guidance to train their children and wards in the ways of God to avoid teenage and unmarried pregnancies as the community would not hesitate in punishing offenders accordingly.

On his part, the Traditional Prime Minister (Onowu) of Ebenebe, Chief Joe Nwegwu, said the Igwe's proclamation was apt and a unanimous decision reached by all stakeholders in the community such as Igwe-in-Council, cabinet chiefs, Ebenebe Town Union (ETU) executives, youths, women leaders and others, and must be abided by all.

In separate interviews, the President General, Ebenebe Town Union (ETU), Hon. Paul Nnatuanya, a member of Igwe-in-Council, Chief Ezekiel Okafor and the President General of ETU Women Wing, Mrs Favour Nworah, assured their readiness to take the message to all the nooks and crannies of Ebenebe with a view to ensuring full compliance by both indigents and residents of the community.

Expressing happiness over the development, the Executive Director of WINET, Mrs Miriam Menkiti urged Ebenebe community to queue behind the proclamation, advising that a task force should be set by the community to enforce compliance where the need arises.