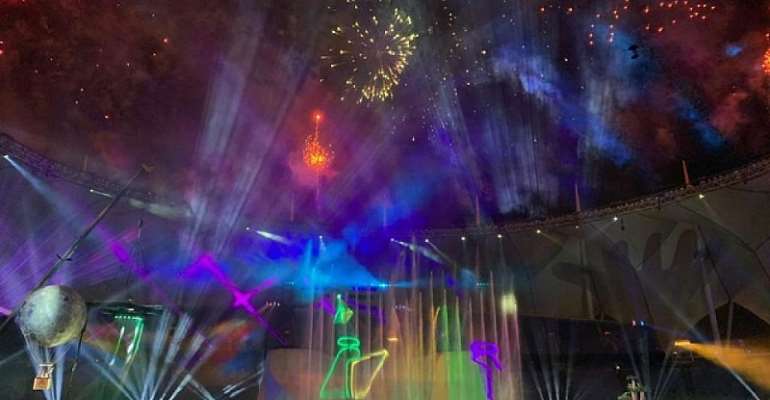 Saudis who attended The Land of Imagination show in Riyadh on Thursday night declared themselves impressed with a spectacle that epitomized a three month festival in the city.

Around 200 artistic and sporting events took place in a dozen parts of the city during the extravaganza.

Sara, 21, studying to be an English teacher, emerged from the King Fahd Stadium and described the show as an unforgettable experience.

"It was just amazing," she added. "I am sad that the season in Riyadh is coming to an end."

Another young woman, a dentist from Riyadh, said: "It was really fantastic, quite outstanding."

What the crowd witnessed at the King Fahd Stadium was a 90 minute performance with more than 480 performers, two white horses on stage and fantastic special effects.

Balich Worldwide shows, which has been behind Olympic Games ceremonies, was called in as strategic partner with the Saudi entertainment authorities. The production was the brainchild of Marco Balich and a creative team led by Angela Alo'.

The show follows her dreams and her magical journey throughout the wonderful landscape of her country, searching for her identity, during the course of one night.

“Leila is a young girl that has a 70-year expectancy in front of her, of a country that is changing rapidly. I believe that she can be the symbol of this gracious and gentle revolution that is happening in this country,” said Balich.

The story begins with Leila closing her eyes and dreaming. She is a pure child who is curious and adventurous and represents the new generation of Saudis and she is searching for a future without prejudice.

Full of tradition
Alo' described the show as full of details with which the audience could identify: the tradition of drawing on sand and the wind, which can come along and cancel everything.

“This sense of wind blowing the sand is exactly what is happening in Saudi. Saudi is changing just like the desert changes. And Saudis are shaping a new horizon”, she said.

Everything on the stage with its sand pit was a reminder of Saudi culture: the landscape of the desert, including palm trees and lakes, the animals such as oryxes, camels and birds, and the massive bright moon sparkling overhead.

The colourful costumes also delighted those watching as did a flying, acrobatic Leila, as she was dreaming.

Light show
There were fireworks and music throughout along with a narration in Arabic, with English subtitles, recounting Leila's journey and dream.

In the end, Leila wakes up from her dream with the realization that the Land of Imagination is her very own country.

The message to the young generation of Saudis, facing an increasingly changing society, is that anything is possible as long as you use your imagination.

“The new generation has an energy that is blossoming in Saudi Arabia. It is a magical moment for this country that is undergoing a transformation and becoming a land of opportunities for the young,” said Balich.