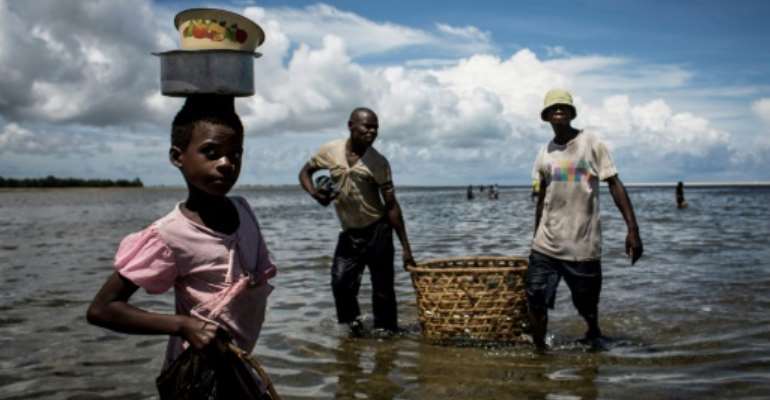 Vast gasfields discovered off the coast of Mozambique's northern Cabo Delgado province in 2010 have raised hopes of prosperity among its impoverished population. By JOHN WESSELS (AFP/File)

Mozambique President Filipe Nyusi on Wednesday vowed to channel future gas revenues back into the economy and fight graft as he began a second term already marred by violence.

Nyusi's ruling Frelimo party was hit in 2016 when it emerged that the government had secretly borrowed $2 billion (1.8 billion euros).

The "hidden debt scandal" uncovered a vast corruption network with links to the regime and sparked the worst financial crisis in the southeast African nation's history.

Despite the outrage, Frelimo won a landslide victory in general elections on October 15, garnering 73 percent of the vote.

Frelimo, which has ruled Mozambique since independence from Portugal in 1975, hailed the elections as free and fair.

At his swearing-in ceremony, Nyusi promised to set up a sovereign wealth fund to diversify the economy and serve as a "saving for future generations".

"The base model we want to create will use gas revenues and we do not want this fund to be diverted for illicit enrichment," said Nyusi, addressing thousands of supporters in a black suit.

Vast gasfields discovered off the coast of Mozambique's northern Cabo Delgado province in 2010 raised hopes of prosperity among its impoverished population.

Energy majors Exxon-Mobil and Total are looking to start exploiting the reserves by 2022.

But a shadowy Islamist militancy has sown terror in the area, staging a growing number of attacks against civilians since it emerged in 2017 and delaying the work.

Nyusi pledged to proceed with the gas explorations and asked the population for patience.

"State coffers will take some time to reap gas dividends," Nyusi said, adding that energy resources should be a "blessing and not a curse".

Demand for ethics and accountability

The president also promised to fight corruption "in all its aspects".

"We will continue to demand ethics, and accountability at all levels of public management," he added.

"The Struggle Continues, my compatriots," Momade posted on Facebook.

Frelimo and Renamo fought a brutal civil war from 1975-1992, devastating the economy and leaving almost one million people dead.

They picked up arms again from 2013 to 2016, and tensions continued until a peace deal was sealed in August last year.

But the start of Nyusi's second term has been rocked by a string of ambushes on vehicles travelling the main north-to-south highway in central Mozambique -- a bastion of former Renamo rebels.

At least 10 people died in the attacks, which began a day after Mozambique's constitutional court validated the results of the October poll.

The government blames Renamo, which has dismissed the accusations.

A splinter faction of Renamo has rejected the peace agreement and claimed responsibility for some of the attacks however.

"Peace is our absolute priority," Nyusi told the crowd. "We will defend peace even if it costs us our lives."