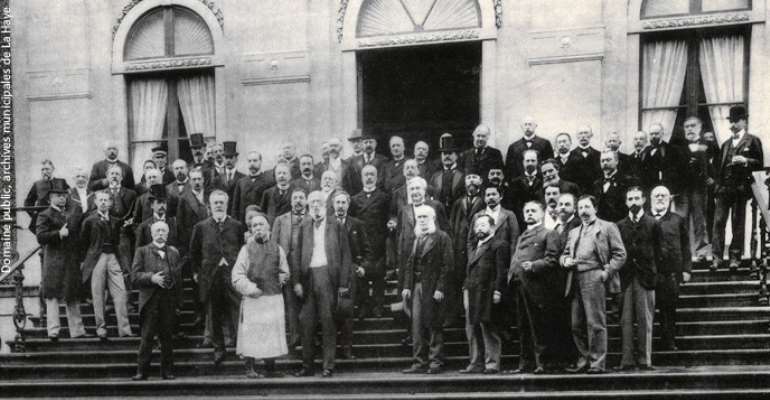 On 24 March 2017, the United Nations Security Council unanimously adopted Resolution 2347, relating to the protection of cultural heritage. This was an unprecedented victory! It has taken nearly a century and a half for the idea to mature. Then, over the past few years, progress was suddenly made. And a growing awareness of the role that cultural heritage can play in fostering security was born.

By Catherine Fiankan-Bokonga
The number of armed conflicts has been escalating since the 1980s − first in Central Asia (Afghanistan), then in parts of the Middle East (Iraq and Syria) and West Africa (Mali). These have led to an increase in the destruction of historic sites by terrorist groups and an explosion in the trafficking of cultural artefacts. The international community has responded actively to the destruction wreaked by ISIS, with a much wider range of instruments at its disposal − making it possible to enhance its protection of the cultural memory of humanity.

In 2017, the international community demonstrated that it was united in its political determination to protect cultural heritage. Resolution 2347(link is external) of the UN Security Council formally recognizes that the defence of cultural heritage is imperative for security.

It took a long time before the seeds of the idea of immunity for cultural property in times of war grew into a historic decision. This marks a new global consciousness of the role that culture plays in maintaining security.

The process began at the end of the nineteenth century, when fifteen European states met in Brussels (Belgium), on 27 July 1874, to examine the draft international agreement concerning the Laws and Customs of War. A month later, Article 8(link is external) of the Brussels Declaration stipulated that, in times of war, “All seizure or destruction of, or wilful damage to […] historic monuments, works of art and science should be made the subject of legal proceedings by the competent authorities.”

Twenty-five years later, in 1899, on the initiative of Tsar Nicholas II of Russia, an international peace conference was held in the Netherlands, with the aim of revising the Declaration (which was never ratified) and adopting a Convention with Respect to the Laws and Customs of War on Land(link is external) .

Also known as the Hague Convention of 1899, it considerably advanced international law and established the principle of the immunity of cultural property. According to Article 27(link is external) of the Convention (revised during the Second Hague Convention on 18 October 1907), “In sieges and bombardments all necessary steps must be taken to spare, as far as possible, buildings dedicated to religion, art, science, or charitable purposes, historic monuments, hospitals […], provided they are not being used at the time for military purposes. It is the duty of the besieged to indicate the presence of such buildings or places by distinctive and visible signs, which shall be notified to the enemy beforehand.”

Three decades later, in 1935, the preamble of the Treaty on the Protection of Artistic and Scientific Institutions − a pan-American initiative also known as the Roerich Pact − formulated the idea that cultural property, which “form the cultural treasure of peoples” must “be respected and protected in time of war and in peace”. 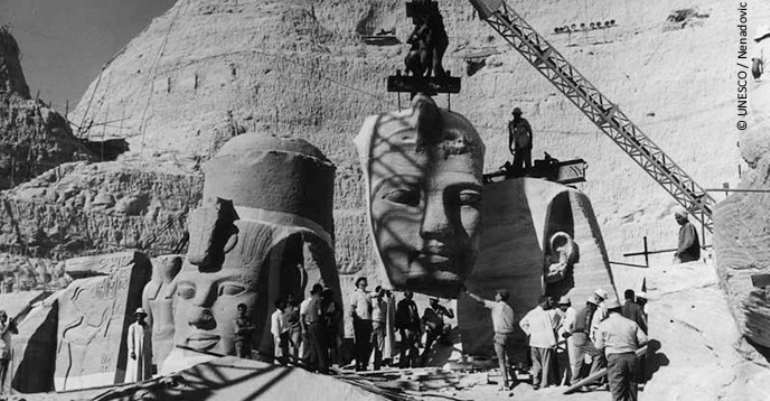 The spectacular Nubia Campaign, co-ordinated by UNESCO (1960 - 1980), was the inspiration for the idea of World Cultural Heritage.

A decisive step forward was taken after the Second World War. In 1948, the Netherlands proposed a new draft international text to UNESCO on the protection of cultural property in times of armed conflict. The Organization began the process of drafting a new international convention, which was adopted at The Hague in 1954.

Safeguard and respect are the watchwords of the Hague Convention for the Protection of Cultural Property in the Event of Armed Conflict and its two Protocols (1954 and 1999). “Damage to cultural property belonging to any people whatsoever” is internationally recognized as “damage to the cultural heritage of all mankind”. The Convention also ensures “the granting of special protection” to “a limited number of refuges intended to shelter movable cultural property in the event of armed conflict, of centres containing monuments and other immovable cultural property of very great importance”.

That same year, in 1954, Egypt decided to build the Aswan Dam, which would flood the Upper Nile Valley and a large number of 3000-year-old monuments of what was once Nubia. At the request of Egypt and Sudan, UNESCO launched an international campaign to safeguard these monuments – one of the most spectacular in the history of mankind, and which would last two decades, from 1960 to 1980. The Nubia Campaign was the starting point for the Convention concerning the Protection of the World Cultural and Natural Heritage, known as the 1972 Convention , and the establishment of the World Heritage List . This text provides for the inscription on the List of World Heritage in Danger of properties threatened with grave danger, including armed conflicts, which are imminent or have recently broken out.

It is essentially because of these texts and co-operation with UNESCO that the UN International Criminal Tribunal for the former Yugoslavia ( ICTY(link is external) ) was able to sentence former Yugoslav naval officer, Miodrag Jokić(link is external) , to seven years of imprisonment in 2004. This was the first-ever conviction for the deliberate destruction of cultural heritage. Under Jokić’s command, hundreds of mortars were fired, between the beginning of October and the end of December 1991, on the old town of Dubrovnik , which was inscribed the same year on the List of World Heritage in Danger.

Largely as a result of these conflicts, UNESCO and several States Parties re-examined the 1954 Convention and drafted the Second Protocol, adopted in 1999. This introduced a new system of heightened protection for cultural properties of very great importance, which should also be protected by adequate national legislation; with the capacity to punish serious violations of the Convention with appropriate sentences. Serious violations include theft, pillage, attacks or acts of vandalism against cultural property, especially those with heightened protection.

More recently, in 2016, the International Criminal Court (ICC)(link is external) found the Malian jihadist, Ahmad Al Faqi Al Mahdi, guilty of war crimes for the destruction in 2012 of ten religious sites in Timbuktu , while the city was under the control of Ansar Dine, a group suspected to have ties to al Qaeda. He was sentenced to nine years’ imprisonment. This was a historic judgement, as the destruction of cultural heritage had never before been considered a war crime .

“Immediately after the destruction in 2012, UNESCO alerted the international community and seized the International Criminal Court to ensure such crimes do not go unpunished,” explained Irina Bokova, Director-General of UNESCO. The Organization undertook a series of measures, ranging from providing the armed forces with topographical details, to the reconstruction of mausoleums . For the first time in history, safeguarding the cultural heritage of a country was written into the mandate of a United Nations Mission ( Resolution 2100(link is external) ). MINUSMA, the UN peacekeeping mission in Mali, was entrusted with “protecting from attack the cultural and historical sites in Mali, in collaboration with UNESCO”. 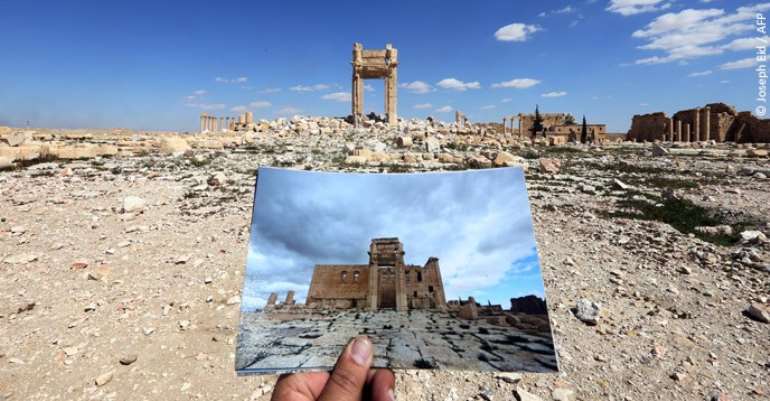 Before and after photographs of the Temple of Bel, one of the most iconic monuments in Palmyra (Syria), destroyed by ISIS in August 2015.

2015, a turning point
The year 2015 marked a real turning point in the attitude of the international community to cultural heritage. In February that year, with the backing of UNESCO, some fifty countries adopted UN Security Council Resolution 2199(link is external) , prohibiting trade in cultural property coming from Iraq and Syria. “This resolution acknowledges that cultural heritage stands on the frontline of conflicts today, and it should be placed at the frontline of security and political response to the crisis,” said Irina Bokova, at the time.

A month later in Baghdad (Iraq), convinced of the effectiveness of “soft power”, she launched Unite4Heritage(link is external) , a global campaign on social media, uniting young people in the celebration and safeguarding of cultural heritage around the world.

On 1 September 2015, the United Nations Institute for Training and Research (UNITAR) published satellite photos(link is external) showing that ISIS jihadists had destroyed the Temple of Bel in Palmyra . The main building of this World Heritage site in Syria no longer exists! Soon after, Italy proposed the idea of creating the “Blue Helmets for Culture” to the UN General Assembly. In February 2016, Italy signed an agreement with UNESCO to create the world’s first emergency task force for culture , composed of civilian experts and the Italian carabinieri.

The United Arab Emirates, together with France, have since held an international conference on protecting cultural heritage in times of armed conflicts, under the auspices of UNESCO. In December 2016, representatives from over forty countries met in Abu Dhabi to reaffirm their “common determination to safeguard the endangered cultural heritage of all peoples, against its destruction and illicit trafficking” and to recall the successive conventions since 1899 that “require us to protect human life, as well as cultural property in times of armed conflict”.

For Irina Bokova, “a new cultural landscape” is being built, and “a new global awareness” is emerging, with the birth of “a new approach to protect culture for peace and security”. Her convictions were quickly confirmed by the unanimous adoption of Resolution 2347 of the UN Security Council on 24 March 2017.

This text includes two of the main operational outcomes of the international conference in Abu Dhabi − the creation of an international fund and the organization of a network of safe havens for endangered cultural property. It also highlights the links between the trafficking of cultural property and the financing of terrorist groups, and between terrorism and organized crime.

For the first time in history, a UN resolution covers the full range of threats to cultural heritage, without any geographical limitations and regardless of whether the perpetrators of the crimes are terrorist groups already on UN lists or belong to other armed groups.

Modern Ghana Quote Reports
Catch up with all the political quotes from our politicians.
Sponsored
More Article
Modern Ghana Links
Gender Crisis in Ghana: The Perceptive Controversy over the Legalization of LGBTQI
Mimicry and manipulation: how baby birds deceive their finch foster parents
Africa looks likely to continue relying on power from fossil fuels for some time
Yusuf Haji, the man with a chequered past who became known as a statesman and peacemaker
Why South Africa needs a new water agency
Infrastructure spend: insights from the effect of a bridge across the Zambezi on maize prices
Recreational hunting, conservation and livelihoods: no clear evidence trail
Trailing giants: clues to how people and giraffes can thrive together
COVID-19: key questions about South Africa's vaccine rollout plan
Quote Reports Dossiers
TOP STORIES