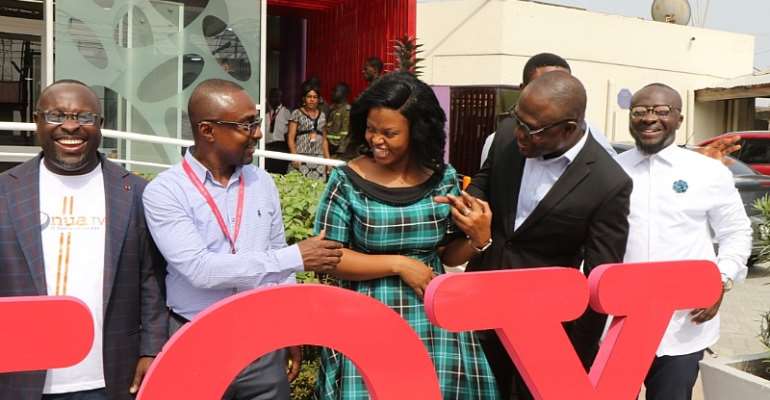 Media General, one of Ghana’s leading media companies has congratulated the Multimedia Group on its silver jubilee.

The visit, according to Mr. Afful was to convey their best wishes to the Multimedia Group for twenty-five years of broadcasting on behalf of the Group CEO of Media General, Beatrice Agyemang Abbey as well as management and staff. The delegation also presented a congratulatory letter and an anniversary cake to the Multimedia Group.

The congratulatory letter signed by the GCEO and addressed to the Chief Executive Officer of the Multimedia Group, Mr. Kwasi Twum, read “we are aware of the contributions that the stations and other media platforms in your business have made towards the development of media and broadcast in particular and democracy, governance and entertainment in general and wish to commend you in that regard. We wish to commend you as well as all your previous and current colleagues for above all, leading the way 25 years ago and sustaining your brands over the years. Let us add that we are happy to be by your side almost the entire period, opening up the space and serving the people with compelling content”.

Nana Elegba, Chief Human Resource Officer of the Mulitmedia Group thanked the Media General team for the gesture. On his part, the Chief Operations Officer of the Multimedia Group, Ken Ansah debunked the perception that both groups are in competition, rather he described the two entities as partners in the media space contributing their quota to national development.

Media General owns and operates some of the industry’s largest and most diversified businesses spanning television, radio, digital media and productions. The wholly owned Ghanaian company has a bold ambition to shape the future of Media and Entertainment in Africa by becoming the continent’s leading and most respected Media company that delivers end-to-end superior value for all stakeholders — clients, viewers, employees, shareholders and the communities in which it operates. Other brands owned by the company are 3FM, Onua FM, Connect FM, Akoma FM and www.3news.com .