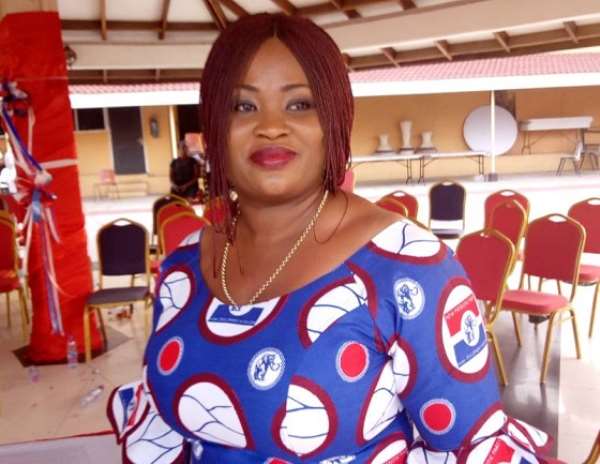 Anna Horma Akaisi Miezah, the Western Regional Treasurer of the New Patriotic Party (NPP), organized a get-together to foster unity and peace among members of the party in the region.

The party which was held in Ellembelle also celebrated babies who were named after her in the New Year and there were many of such babies.

The party was also meant to bury the hatchet among feuding factions created during the parliamentary primaries in the Ellembelle Constituency.

Those who were in attendance included children from the Awiebo orphanage and party communicators in the constituency who were treated to sumptuous dishes and assorted drinks.

Miezah took the opportunity to address the audience on the need for people to be vigilant in terms of their personal security and also encouraged the people of Ellembelle to vote massively for the NPP to enable the government to continue with its implementation of social intervention policies that the people of Nzema, regardless of political affiliation were benefitting from today. She also encouraged the youth to take advantage of the free SHS policy to get some meaningful education to support themselves and their families.

Miezah stressed on the need for the NPP to be united in the constituency to be able to wrestle the parliamentary seat from the opposition NDC. “The parliamentary primaries are over and there is no longer Horma or Bonzoh camp, we have only one camp which is the NPP camp being led by Bonzoh K who has been elected as the parliamentary candidate for Ellembele, so we should all rally behind him, and support him to win the seat for the NPP.”

The people on their part were very grateful to the regional treasurer for not abandoning the constituency after losing to Kwasi Bonzoh in the primaries and for her continued humanitarian acts for the people of Ellembelle. The party had brought them all together once again and also energized them to go all out to campaign for the NPP in Ellembele. To them, this has never happened in the constituency.