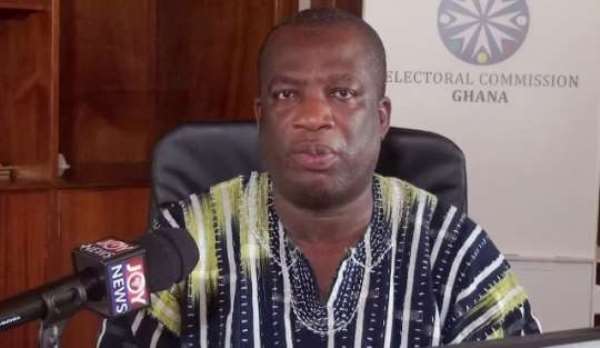 The Electoral Commission (EC) has said its plan to have a new voters register for this year’s general election will go ahead as scheduled.

The commission has reiterated the fact that the decision to have a new register is not intended to cheat or disenfranchise anyone, insisting that it will be vindicated at the end of the day.

In that context, it has given an assurance that it will come up with a register that is better and more credible and efficient than the current one.

Speaking to the Daily Graphic in Accra last Tuesday, the Director of Electoral Services at the EC, Dr Serebour Quaicoe, said: “We have our plan for the year and we have rolled it out.”

Parties’ positions
A coalition of six political parties — the National Democratic Congress (NDC), the People’s National Convention (PNC), the All People’s Congress (APC), the United Front Party (UFP), the United Progressive Party (UPP) and the Eagle Party — have registered their opposition to the compilation of the new register and threatened a series of demonstrations and other actions to compel the EC to back down on its decision.

The parties said the compilation of a new register would be a drain on the national coffers and also be a threat to peaceful elections.

However, a former independent presidential candidate, Mr Jacob Osei Yeboah, and the Liberal Party of Ghana (LPG) have declared their support for a new register and urged the EC to go ahead with the plan to compile the register, since it will eliminate the myriad of challenges associated with the current register.

Unconvincing reasons
Reacting to the stance taken by the coalition of six political parties, Dr Quaicoe said their reasons were not convincing.

He said the Constitution had mandated the EC to demarcate constituency boundaries, compile voters registers and conduct elections, noting that in the course of taking such actions, consultations were done and suggestions welcomed from stakeholders, including the political parties.

“But it does not mean that once you come up with a suggestion, then we are bound by it,” he emphasised.

Argument
Dr Quaicoe noted that concerns raised by some people as to why the current voters register was used for the district level elections (DLEs) if it was not credible did not hold because DLEs were not the same as general elections.

“When it comes to DLEs, they are very difficult and stressful but not controversial and the tension is low,” he said.

He indicated that the EC did not want any party to go into the general election, lose and come out with complaints against the commission.

He said the EC knew what it was about and was convinced beyond every reasonable doubt that it was working for Ghana and not for any individual or political party.

“We are convinced that after we have compiled a new voters register, everybody will appreciate the fact that we took a good decision,” he added.

Apprehension
The Director of Electoral Services at the EC appealed to all those who were apprehensive about the compilation of a new voters register to relax and be patient with the commission, since no one at the EC was out to cheat them in any way.

“So we ask all those who have challenges to be patient. The right to register in Article 42 of the Constitution is mandatory; it is a right to the people and the EC does not intend to disenfranchise anybody,” he said.

Scenario
Giving one scenario that happened during the recent DLEs, he said there was a polling station on the campus of the Kwame Nkrumah University of Science and Technology (KNUST) which had more than 800 voters but no one showed up to vote because the voters had completed school and gone home.

“We are talking about the current register. We compiled the register about eight years ago.

If it were to be the general election, probably some of them would have come to vote. That is why you cannot compare the two elections,” he explained, adding: “So we want to give Ghanaians a current and acceptable register.”

He added that another critical issue was the increasing rate of manual verification with regard to the use of the current register.

Cost
Dr Quaicoe said the EC was not out to dissipate funds, as some people were suggesting.

Strengthening his position, he said in 2016, the total budget for electoral activities was almost GH¢1.8 billion, although the EC did not compile a new register.

Efficiency and proper planning on the part of the EC, he said, were responsible for the drop in the cost from GH¢1.8 to GH¢1.3 billion.

“With the current cost, we are buying new equipment and everything is inclusive, but we are spending only GH¢1.3 billion.

He said the EC started talking about the new register in March 2019 and would continue talking to Ghanaians about it.

“We are all men and women of integrity. Our system is such that we don’t keep things from the public, so whatever steps we take, people will be there to watch.

Therefore, if anybody has any bad intention, people will get to know.

“The right to register is a constitutional one; you can’t deny anybody. We have conscience too,” he said.

He said the EC would continue to engage the political parties and give them reasons for the new register.

Biometric Verification Devices
Dr Quaicoe said the current biometric verification devices (BVDs) did not take pictures, but the new ones the EC wanted to introduce would take pictures.

“So when you go there and your fingerprint is not captured, the new BVDs will take a picture of you and compare the new picture that has been taken with the picture which was captured during the registration, and the system itself will tell you that the two pictures match.

Then you are cleared to vote,” he said.
According to him, the current BVD could not be upgraded, saying that it was like a mobile phone without a camera.

“We are saying that the current system has reached end-of-life, meaning that the providers of the equipment are no longer producing.

So when you have a problem with the kits, you have to go to the open market.

As we speak, we have a lot of cartridges in our store we cannot use,” he said.