Bolga-Bawku-Pulmakom Road Will Be Completed By July 2020 — Bawumia 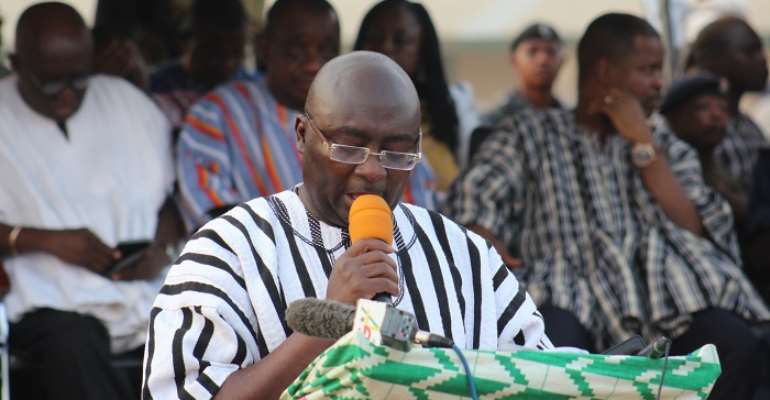 Vice President Dr. Mahamudu Bawumia has announced that the controversial 116 kilometre Bolgatanga-Bawku-Pulmakom road will be completed by the end of July this year.

According to the Vice President, the Brazilian contractor working on the road, Queiroz Galvão, has promised to work harder and faster, adding, “…On my way here, I stopped to have a word with the contractor and inspect work done so far. The contractor has assured that by July 2020 the road will be completed.”

He was speaking at the climax of the 32nd Samanpiid Festival in Bawku recently where he also donated an amount of GH¢10,000 to the Bawku Naba Educational Fund and another GH¢20,000 and assorted drinks to support the festival.

Samanpiid is a harvest and thanksgiving festival celebrated by the Kusasis in the Bawku Traditional Area. It is a period to take stock and resolve to change what doesn’t promote development, unity and the progress of the area.

This year, a total of 33 sub-chiefs and 25 divisional chiefs within the Bawku Traditional Area attended the durbar.

A 60-member delegation from the Asantehene also attended the festival for the first time at the invitation of Zug-Raan Bawku, Naba Asigri Abugrago Azoka II.

Touching on education, Dr. Bawumia disclosed that it has not been easy implementing the Free Senior High School programme, but was quick to give an assurance that government was committed to ensuring that many more Ghanaian children gain secondary education to lessen the burden on parents.

He was hopeful that efforts and investments by government in the education sector ‒ especially in the area of secondary education across the country ‒ would lead to ending the track system.

Dr. Bawumia said government was expanding and rehabilitating old dams and constructing small dams across the north to ensure an all-year round farming to enable households to make money to attend to their basic needs.

The Vice President said with the investments being made into agriculture, there is bound to be high yields, hence the need for warehouses to keep the excess food for future use and sales.

Naba Asigri Abugrago Azoka II also commended the government for the investment made in agriculture in the area and reminded government to fulfill its promise to construct a warehouse for farmers to store their excess produce.

He also called on government to release more funding to the contractor working on the Tamne Dam to enable the company to work faster and complete it before the next rainy season.

Unfortunately, the pilot phase of the 'rearing for food' programme did not cover the Bawku Municipality, for which reason the paramount chief of Bawku called on government to extend the programme to the Bawku Traditional Area to benefit the many small scale animal farmers in the area.

The Member of Parliament (MP) for Bawku Central, Mahama Ayariga, who represented the six MPs from the Bawku Traditional Area, called on government to finish all ongoing projects in the area of education, health, agriculture and the rural electrification programme, which he said have come to a halt.