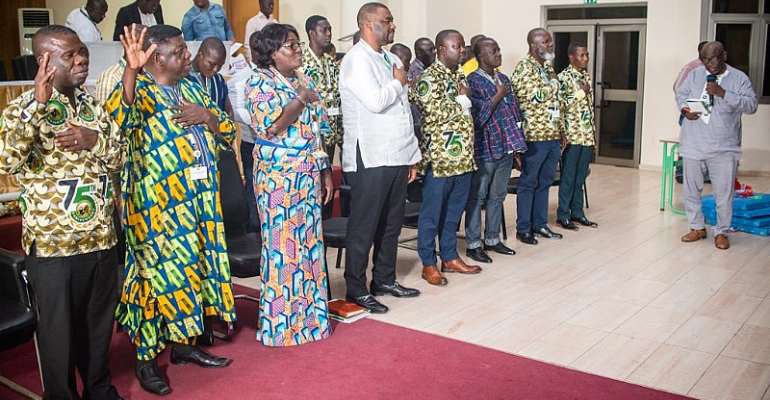 The Ghana Mine Workers Union (GMWU) has elected new national officers to steer the affairs of the union for the next four years.

The new national officers were elected at the 12th the Quadrennial Delegates Conference of the union where he following resolution was passed.

RESOLUTION PASSED AT THE END OF THE 12TH QUADRENNIAL DELEGATES CONFERENCE OF GHANA MINEWORKERS' UNION OF TUCG HELD AT THE CONFERENCE HALL OF THE UNIVERSITY OF MINES AND TECHNOLOGY, TARKWA FROM TUESDAY 10 TO FRIDAY 13 DECEMBER 2019

The Quadrennial Delegates Conference of the Ghana Mineworkers' Union of GTUC having met in Tarkwa from 10-13 December, 2019 and:

Concerned that non-standard forms of employment (fixed term contract, outsourced employment contracts, temporary and casual work) continue to be on the increase and since its emergence in our labour market has gravely skewed the power in the employment relationship to the detriment of workers with considerable socioeconomic consequences on workers and government and;

Acknowledging that the Africa Union and governments in the resource-rich countries on the continent including Ghana appear to be reneging on their decision to actualize the African Mining Vision and the ECOWAS Mineral Development Policy (for those in West Africa) thus defeating the continent’s quest to harmonize and standardize its mineral exploitation regimes and use it as a catalyst for development and;

Concerned that government continue to not only enter into lopsided stability/development agreements with mining companies but also fail to monitor and enforce the content of these agreements thus shortchanging the interest of the country and;

Also Concerned that despite the many campaigns and advocacy drumming home the need for Government to rethink its approach to fixing the infrastructural deficit (rail system, road network, modern medical facilities, etc.) in mining communities to boost mining operations and also transform the local mining economies despite the huge ‘plunder’ of resources leaving these communities and;

Noting that the notoriety that the galamsey menace gained in recent past after the activity wrecked colossal havoc to our lands, rivers and water bodies forcing a Presidential ban continue to exist with some reported official collusion and recalcitrant local and foreign interest which continue to threaten our nation’s ecosystem and large scale mining and;

Considering that the fourth industrial revolution (industry 4.0) which is fast-taking over the production/manufacturing and service delivery including mining in most parts of the world including Ghana and therefore pose a disruptive threat to work and workers and;

Observing that although Ghana’s mining industry is heavily regulated, the issue of sustainable mining policy intending to situate mining to serve the needs of the current as well as the future generations appears to have eluded regulators with multinationals exploiting the regulatory gaps thus leading to a faster depletion of our finite mineral resources and;

Disappointed that Ghana, known for its active mining has failed despite numerous campaigns to ratify ILO Convention 176 (Safety and Health in the Mines Convention) since it was promulgated in 1996 to lift health and safety standards in our industry to align with this internationally acceptable health and safety framework and;

Convinced that the recent financial sector crises which led to the Bank of Ghana-led clean-up that has brought untold hardship to many innocent and hardworking Ghanaians as many depositors continue to have their funds locked and;

Alarmed that the two key labour market institutions in Ghana (Labour Department, Labour Commission) have over the years not received the needed attention and support from Government and this is without doubt affecting the critical role the institutions are mandated to play;

Do hereby resolve:
1. That given the far-reaching implications of non-standard forms of employment on workers (i.e., job and income insecurity, declining pensions, abuse of workers’ rights, unfavourable working conditions, etc.), the government (i.e., declining taxes, consumption, declining pension fund, employment creation, etc.), and the economy as a whole, the Ministry of Employment and Labour Relations through the National Tripartite Committee must as a matter of urgency, prioritize this growing concern and engage with all stakeholders in order to nib it in the bud without any further delay.

2. That Government and the other stakeholders have no further excuse but approach the issue of mining community development not only from the socioeconomic standpoint but the likely security threat the continuous neglect poses by ensuring the full operationalization and realization of the Minerals Development Fund Act 2016 (Act 912) and the Minerals Income Investment Fund Act 2018 (Act 978) without any further delay.

3. That Government must, as a matter of priority, set up an independent body or mandate any of its existing regulatory institutions to supervise and ensure total compliance with the tenets of these development/stability agreements as the continuous neglect is a serious drain on the country and a leeway for multinationals to abuse such agreements with impunity.

4. That given the importance of the Africa Mining Vision (AMV) to the development of Ghana and the continent at large, we stand with the Organisation of Trade Unions in West Africa (OTUWA) to demand through the Ghanaian Government to the African Union to step up efforts aimed at bringing the full implementation of the AMV to fruition. We are also calling on other civil society organizations and the media to join forces to push the continent to act on the AMV.

6. That Government and the social partners must, through the National Tripartite Committee, initiate a national dialogue on industry 4.0 (Fourth Industrial Revolution) for a dispassionate discourse with the view to understanding the phenomenon and also evaluate the likely ramifications it might have on society to permit a workable intervention that protects the interests of all.

7. That Government must as a matter of priority check the wanton depletion of the country’s finite mineral resources by taking practical steps to control the volumes to mine at a particular point in time. This will ensure that mineral exploitation serves the needs of both current as well as future generations.

8. That Government must show faith and different commitment to ratifying the ILO Convention 176 (Safety in the Mines Convention) failing which the Union and its partner civil society organizations will mount sustained pressure to ensure that the ratification happen in the ensuing year.

9. That Government must speed up the disbursement of funds to the validated customers of the defunct financial institutions to alleviate the dire financial situation most of them have gone and continue to go through. Also, critical to ensuring justice for the victims is the need to hasten the trial and prosecution of the perpetrators of these heinous financial crimes, to serve as a deterrent to others who might be nursing any such criminal intentions.

10. That the sorry state in which the Labour Department and the Labour Commission finds themselves cannot continue forever given the important roles they are supposed to play in our labour market. In that regard, we demand that Government beginning 2020 gives a completely different attention to these two institutions as their continuous neglect could affect the relative industrial peace the country is enjoying.

Also critical and worth highlighting, is the fact that the Union as part of the Conference also elected National Officers to steer its affairs for a four-year tenure. The newly elected officers are: