Otumfuo Advise Politicians To Campaign For Votes, Not Violence In 2020 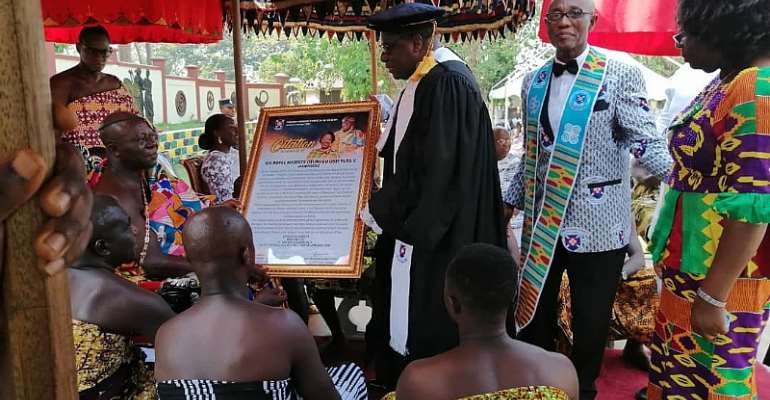 Asantehene Otumfuo Osei Tutu II, has admonished politicians in the country not to use this year's electioneering campaign to promote political violence among the citizens.

According to him, there is the need for all political actors to behave with the assuredness on the campaign trail since any abuse will be unwarranted, adding that a good campaign devoid of violence promotion would surely win the day.

Speaking at a New Year service organized by the Asante Presbytery of the Presbyterian Church of Ghana at the Manhyia Palace in Kumasi on Wednesday, the king said it is his prayer that politicians would see the need to safeguard the prevailing peace and tranquility in the country.

For him, peace remains a priceless commodity throughout the world and therefore wants Ghanaians to acknowledge this.

“I want God to touch the hearts of our politicians not to do anything to jeopardize the peace of our country. You don't need violence to win an election, but good campaign can earn you the votes,” the Asantehene stated.

He said that he had always stood for the truth and would continue to speak truth to power in the name of peace for the betterment of the country and its citizens, and asked for prayers to be able to achieve his mission.

Moderator of the Presbyterian Church of Ghana, Rt Rev Prof Joseph Obiri-Yeboah Mante, called on government to promote godly values alongside the socio-economic development of the country.

“In the Bible, kings who promoted godly values alongside socio-economic development pleased God, and this is what I want the leadership of this country to do in order to please God,” he explained.

Rev Mante praised Otumfuo for being an instrument of peace in the country as he recounted the immense contributions of the Asantehene to socio-economic, political and spiritual developments in the country.

In a citation, the Moderator indicated that the Asantehene had been a great blessing not only to Asanteman, but also to the country and the Presbyterian Church as a whole.

“The church appreciates your efforts and renewed interest in making the gospel to reach all persons within the Ashanti kingdom,” Rev Prof Mante said.

He called for continuous dialogue between nananom and the church so as to bring the chieftaincy institution into communion with Jesus Christ.

Savannah: NADMO to clear buildings on waterways after heavy ...
16 minutes ago