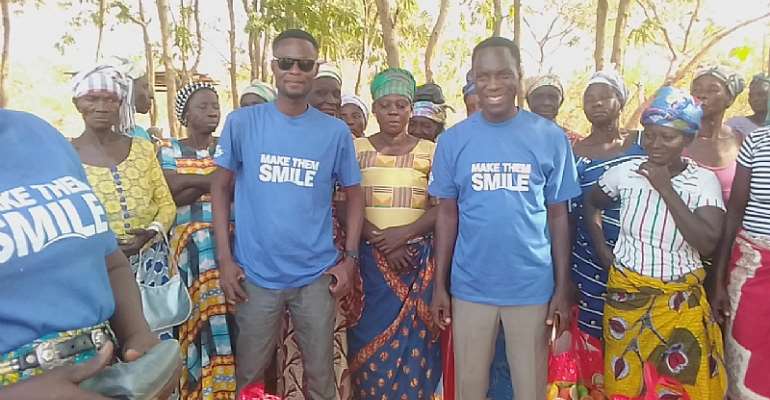 Reta Foundation, a non-governmental organization based in Atebubu in the Bono East region on January 1st, 2020 made donations to over 60 widows from 7 selected rural communities in Atebubu Amantin municipality.

The program was dubbed *make them smile*, saw the widows taking home items like; rice, cooking oil, tin tomatoes, drinks, and many more.

Briefing the media after the donation, the founder, Bismark Boakye Yiadom, gave the rationale behind the donation stating that, it part of the organization's activities to care and show love to widows, the vulnerable and less privileged to in the society, hence the need be to put on smiles on face of these widows.

The items worth thousands of cedis were given to the widows on the kind benevolence of the general public.

He finally appealed to philanthropists and other stakeholders to come the foundation's aid to train these widows in entrepreneurs skills. "my brother, these women who have nothing on them and through no fault of them, lost the husbands. So we need to give them hope by providing them with entrepreneurship skills. I'm therefore calling on the general public to support give these the needed training", he stressed.

Meanwhile, receiving the items in the community, Mr. Bashiru Jagri, the assemblyman for the area, expressed profound gratitude to the Foundation for their kind, he also called for support from philanthropists for the widows.

Some of the widows who spoke to the media thanked the foundation for remembering them on this special day called for God's blessings. They also appealed to the general public to be kind to Widows.