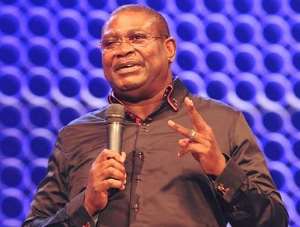 The General Overseer of the Living Streams International, Rev. Dr Ebenezer Maama Markwei, has said 2020 will be a destiny-changing one.

He however noted that it will require discipline, hard work and keeping hope alive to feel the impact.

“The year 2020 offers prospects. It is a destiny-changing year, but that can only be achieved through hard work, hope and discipline — discipline as individuals in all facets of our lives and collectively as a nation. We will be offered with the chance to make choices in our lives and that of the nation, and those choices will define the change of destiny we all desire,” he stated.

Exclusive message
Delivering his New Year Message in an exclusive interview with the Daily Graphic, Rev. Dr Markwei urged Ghanaians not to hold on to the disappointing and challenging times in the previous year but rather use the lessons learnt from those experiences to forge ahead.

Destiny changer
He said after a rather difficult year, the new year was an opportunity for Ghanaians to take important lessons from the immediate past to improve upon their lives in the new year, stressing that the gift of life was an indication of the hope ahead.

“Yesterday is past, but it was full of lessons, and the new year will help take stock of what was done, why we failed or succeeded to help us become better persons and successful in the new year.

“If we fail to do that, then we cannot change our destiny, as is required. We have to work harder than before, be disciplined in managing our time, resources and relationships, as well as in other facets of life, and we can be sure that there will be reward for our efforts,” Rev. Dr Markwei emphasised.

Shutting the door
The General Overseer said while it was important to have a retrospect review of the past while striving for change and improvement, it was also necessary for people to shut the door on the painful past, else it would impede progress.

“I would urge Ghanaians, particularly those who have gone through a very challenging 2019, to learn to shut the door. Like coming out of an elevator, we have arrived at the floor we need to get off. We cannot keep the elevator door open.

“We have to shut the door to pain, disappointment and all the bad things that happened to us, including friendships,” he advised.

Markwei’s 4 Ps
Rev. Dr Markwei said with voters and Ghanaians now becoming more enlightened when it came to electing and rejecting candidates, this year’s elections would be very different and politicians should not expect to be voted for because of what they say, stressing that after 28 years of multi-party democracy, Ghanaians had become mature to make informed decisions.

Another aspect of the destiny-changing year, he said, was the year being one that would see Ghanaians make important decisions politically, with the world watching to see what choices would be made and the fallouts.

He, therefore, urged Ghanaians to critically evaluate the choices available before deciding on who they would vote for, as those choices could make or mar the destiny.

He urged Ghanaians to consider the personalities, their promises, their past records and their pathways to seeking power to elect them, stressing the need to choose competence over rhetorics.

“This year will be another significant one because Ghanaians will be going to the polls. Interestingly, during every general election, many people around the world take interest and closely monitor what will happen. This year will not be any different, but we owe it to ourselves and future generations to get it right and preserve the well-being of the nation,” he advised.

Stressing the importance of the nation’s welfare, he said people in position of power would come and go, but “we must be careful not to leave the nation in disarray and make life more difficult for generations to come”.

Choices
He said in assessing the personalities who would put themselves up for election, it was important for Ghanaians to evaluate who those people were and their character, saying they should be “people we can trust and competent enough to help lead the country to success and prosperity”.

Again, in making the choices, Ghanaians must critically weigh the promises the politicians would make and consider if they were realistic and attainable, he said.

“Again, it is important to evaluate people on their records of past performance and see if what they will be telling us this time is in sync with what they promised to do or did in the past,” he added.

“People are being made to believe that by physical strength, one can rule. Political vigilantism is getting entrenched and we should all be worried because there are examples of how countries have been devastated by such tendencies that were not nipped in the bud.

“In politics, brawn can never win over brain and that should be drummed home. While considering the three Ps I have advocated, I urge Ghanaians to consider the pathways of politicians and reject any form of abuse or vigilantism,” he stressed.