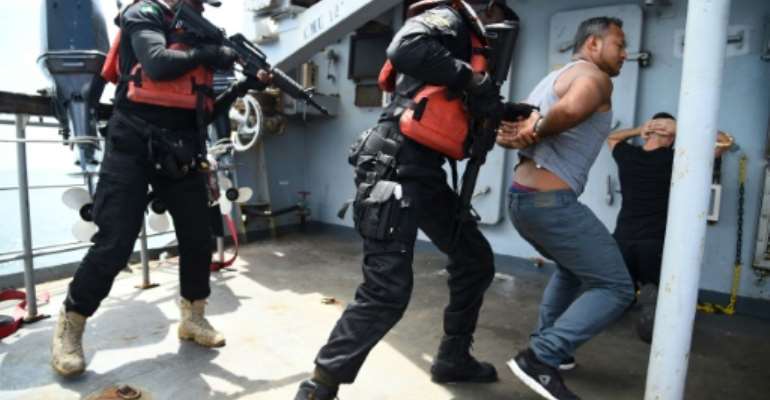 Numerous exercises with Western navies have brought some progress along with better cross-border cooperation after leaders from the region agreed to bolster the fight against piracy in 2013. By PIUS UTOMI EKPEI (AFP/File)

Armed men staged a night raid on a Greek oil tanker anchored in a Cameroonian port and abducted eight crewmen, including the vessel's Greek captain, the merchant marine ministry and the ship's owner said Tuesday.

The five Greeks, two Filipinos and a Ukrainian were part of a 28-member crew aboard the Happy Lady in the port of Limbe, near the economic capital Douala, the ministry said in a statement.

One crewman, a Greek national, was receiving treatment at a local Cameroonian hospital for a wound to the ankle by a stray bullet, port police said in a statement.

The attack occurred at around 11:30 pm (2230 GMT) on Monday, the EMA representative said, adding that there was no exchange of fire as the crew was not armed.

Cameroonian authorities have not confirmed the attack, the third such incident in a month, of which two targeted Greek vessels.

Third incident in a month

The Gulf of Guinea, which stretches some 5,700 kilometres (3,500 miles) from Senegal to Angola, has become the new world epicentre of piracy, lootings and kidnappings for ransom, especially along the Nigerian coast.

Few of the attacks are so close to shore as Tuesday's, however.

Map locating Limbe in Cameroon, where eight sailors were kidnapped on December 31 in an attack on a Greek oil tanker. By (AFP)

They released three of the men on December 13, but one died in captivity.

An investigation is still under way, but "it appears his death was not a result of actions by the hostage-takers but of illness," the tanker's shipbuilder said at the time.

Pirates attacked four ships in the harbour of the Gabon capital Libreville on the night of December 21, killing a captain and kidnapping four Chinese workers whose fate remains unknown.

Despite such headline-grabbing incidents, regional navies like Nigeria's point to a decline in attacks since 2018 and say increased international cooperation, better resources and more assertive patrols are helping.

Numerous exercises with Western navies have brought some progress along with better cross-border cooperation after leaders from the region agreed to bolster the fight against piracy in 2013.

Much of the problem originates in the Niger Delta where the region's vast oil wealth has failed to trickle down to local populations and widespread poverty has stirred unrest.

Pirates emerge from the creeks and swamps in high-powered speedboats to raid passing ships, kidnap crews and spirit them back to Nigeria's shores.

Tactics have shifted over the past decade as a fall in the oil price and tighter regulation has seen criminal gangs switch from stealing cargoes of crude to abducting sailors for ransom.