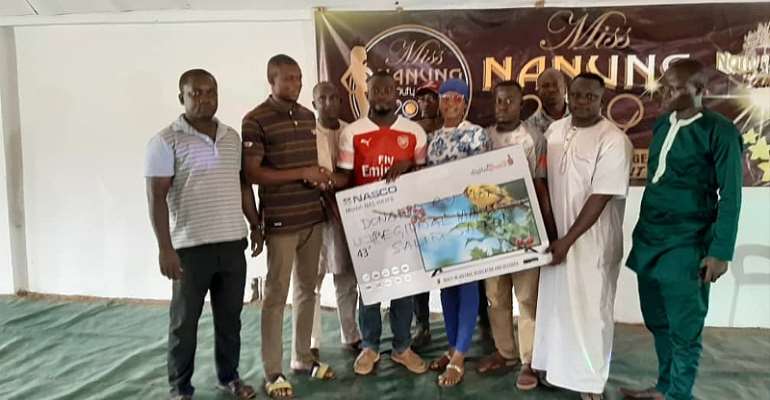 The Northern Regional Minister, Hon. Salifu Sa-eed has made a donation of a 43” plasma television to OLA POBA Entertainment, the organisers of the 2019 edition of the Miss Nanung Beauty Pageant.

The presentation was made on behalf of the minister on Saturday December 28, 2019 by a team led by Mr. Mustapha Abass.

The delegation told management of OLA POBA Entertainment that Hon. Salifu Sa-eed wishes he could do the presentation in person, ‘but he has to attend to an equally important assignment’, Mr. Mustapha Abass stated.

According to Mr. Mustapha Abass , Hon. Sa-eed is not taking the beauty pageant as just entertainment. "He sees this as a platform for the youth to explore their talent and it should be encouraged."

The Northern Regional Minister believes the youth is an important stakeholder in the development of Nanung. He has asked us to encourage you to work hard so as to maintain the peace in the area.

Mr. Kpebu Jacob who received the donation on behalf of OLA POBA Entertainment expressed the team’s gratitude to the minister. ‘This donation has brought relief to us as a team and at the appropriate time we shall thank the minister.

Mr. Kpebu Jacob called on other stakeholders to extend similar donations to make the programme a success. He explained that the beauty pageant since its inception five years ago has helped nurture leaders particularly among females.

To support his call, Mr. Kpebu Jacob told the delegation that the pageant has succeeded in building confidence among females. ‘Ms. Karima Mohammed a past student of the Tamale Technical University ever won the pageant and now she is the Coordinating Secretary for Ghana National Union of Technical Students (GNUTS)’, Mr. Kpebu Jacob added.

He advised parents not to see the event as avenue for their wards to go wayward. "They need to look at it as something that encourages academic work since all the contestants must research before they can win."

The theme for the 2019 edition is "Enhancing Cultural Heritage through Entertainment." Five young ladies from the Nanumba North Municipality and the Nanumba South District will compete for various positions and prizes.

Organisers of this year’s event were happy for the massive turnout for the programme.