Let Us All Rise To Save Somalia 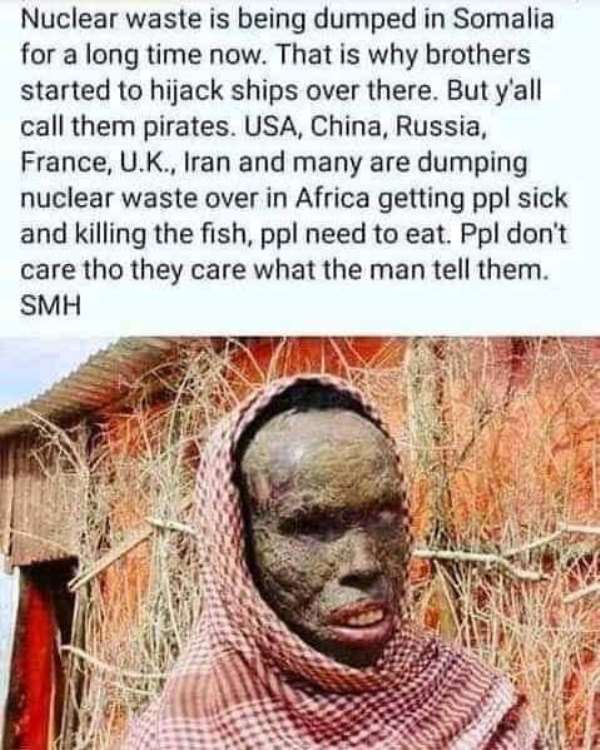 I've all this while had a problem with how the Somali pirates are treated.

And the unfortunate thing is, our halfbaked myopic mediocre journalists regurgitate the cooked stories about Somalia, and demonized our own people that are colonised brutally in our days.

Though I don't support or benefit anyway from terrorism, but the Somalis are not treated fairly.

They the Somalis like Ghana are blessed with resources in aquatics - fishes and other minerals bequeathed to them in their seas. But who benefits from the fishing there? The infiltrators, one who turns back to blacklist the indigenous Somalis as pirates and terrorists.

The wantrepreneurs who make Somalia their minefield turfwar should be fought tooth and nail with our newly acquired strength, Comrades.

Since the ouster of Siad Bari, Somalia's waters are minefields for the infiltrators. When the people revolt, they're branded pirates, terrorists, so they'll achieve their diabolical goals - destroy and capture.

*Time will tell.*
A new African will definitely be born out of this crucible, and nothing could incinerate his power. For to the world, he's entering dead already.

Comrades, all is not lost, we'll lose when we give up and are not gingered by the knowledge we're armed with now.

Never again should we look on unconcerned as toxins are dropped in our onshore and offshore here in Africa. They sell cancer to us and come backdoor with the deceit of giving us drugs to heal our pains.

We've known them. They did it to Ivory Coast, it's going on unstoppably in Somalia now.

When our people cannot stand the heat they pile upon us and when we decide to migrate to their land, they brand us economic migrants and cause our rickety boats to sink and fishes of the sea feeds on our beautiful African Black skin.

When Canada dropped used and unprofitable goods in the shores of the Philippines, the right-thinking authorities there ordered it return.

Those in Ivory Coast accepted pittance for compensation after the toxins killed women and children in murderous proportions.

A failed leadership of a failed generation being puppets of the neocolonialists in Africa.

*We're taking over, we're building again the fallen walls of Africa with the patriotic soldiers.*