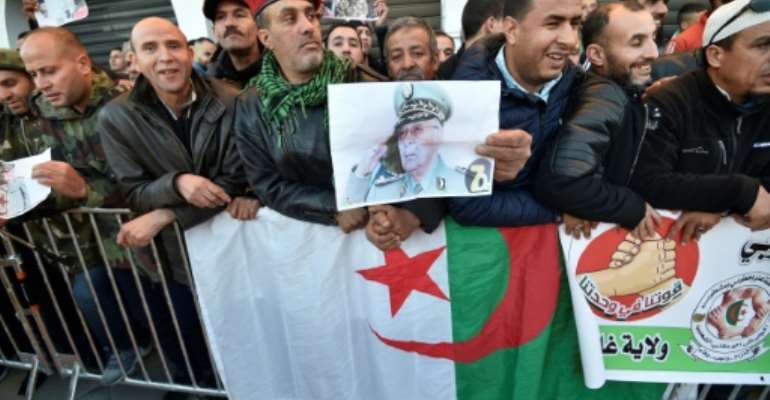 People stand with national flags and portraits of Algeria's late military chief Lieutenant general Ahmed Gaid Salah as they gather outside the People's Palace during his funeral in Algiers on Wednesday. By RYAD KRAMDI (AFP)

The wooden coffin containing the body of Gaid Salah, who died of a heart attack on Monday aged 79, arrived at 0630 GMT, covered in a national flag and carried by officers.

Surrounded by large numbers of motorbike outriders, the funeral procession converged on the palace, which was built in the 18th century for Ottoman governors.

Gaid Salah became the country's de facto strongman after longtime president Abdelaziz Bouteflika was forced to step down in the face of huge street protests in April.

Interim military chief of staff Said Chengriha was in attendance, while President Abdelmadjid Tebboune arrived a little after the procession.

Tebboune won a December 12 presidential election with 58.1 percent of the vote on a turnout of less than 40 percent, according to official results, in a poll dismissed by protesters as a ploy by Gaid Salah and other establishment figures to consolidate their power.

After his win, Tebboune awarded Gaid Salah the National Order of Merit, Algeria's highest honour. After the general's death he announced three days of national mourning.

Images broadcast by several TV stations showed a crowd massed at the gates of the palace to pay their final respects to Gaid Salah, who served as army chief for 15 years.

He was due to be buried shortly after 1200 GMT in Martyrs' Square in Al-Alia cemetery, where former presidents and other major Algerian figures are laid to rest.

It’s beyond debate; Akufo-Addo has completely mismanaged Gha...
40 minutes ago

My morale is down – Angry Inspector reacts to mass promotion...
44 minutes ago