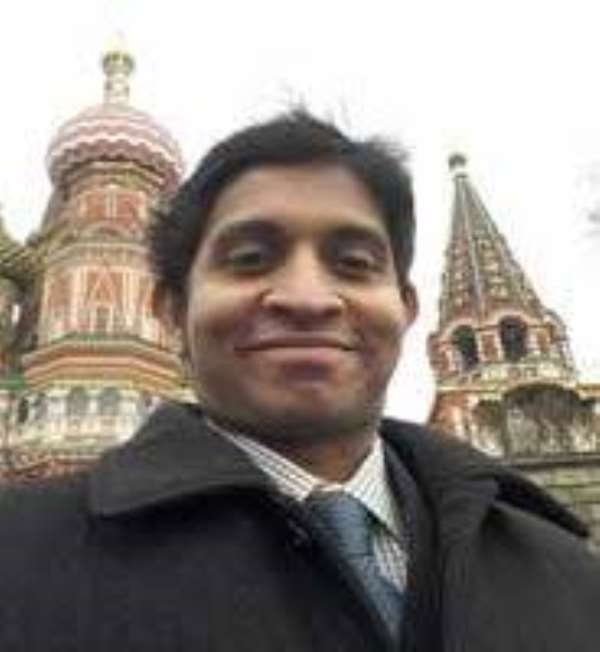 After the first Russia-Africa Summit held in Sochi, Russia and Africa have opened a new chapter in their relationship. Russia and Africa, during the summit, pledged to take significant steps in raising, both at a bilateral level and in various multilateral formats, cooperation in many spheres. Since the collapse of the Soviet era, Russia has played a low key-diplomacy there, now that is set to change.

For nearly those three decades, many foreign players have been attracted to Africa, primarily, because Africa is steadily striding along the road of socioeconomic and technological progress, and is playing an increasing role in addressing issues on the international agenda.

In this interview taken by Kester Kenn Klomegah for Eurasia Review, Punsara Amarasinghe, who previously held a research fellowship at Faculty of Law, Higher School of Economics in Moscow and now a PhD Candidate in Law from Scuola Superiore Universitaria Sant'Anna di Pisa in Italy, discusses some aspects of Russia-African relations.

Amarasinghe further noted that Russia, despite high competition on the continent among many foreign players, could contribute to the sustainable development of African countries. Here are the excerpts:

Q: What is your interpretation of Africa, in practical terms, as a strategic partner for Russia?

Africa has always been a great partner even before the Soviet Union emerged. We cannot forget Pushkin’s grandfather was an African ...! Nevertheless, the modern importance of Africa as a strategic partner for Russia mainly arises from the way how the West has neglected African countries, whereas Russia sees Africa as a better platform to restore its power projection. Russian ventures in Africa can be further bolstered from accessing natural resources and also Russia is the largest arms supplier to Africa. In fact, some Russians have been recruited by Africa states as security advisors.

Q: In the Soviet era, the relationship was that of solidarity to confront western capitalism and dominance. What is your reaction to this position? Now, is it strategic business rivalry and/or competition?

In Soviet era, African and Asian states looked for Moscow as a sanctuary, and in return, USSR provided many assistance to Africa. Soviet military supply to Egypt was just an example, In addition, Soviet ideology continued to influence upon African youth through Lumumba University. The reason the interest of Russia in Africa cannot be exactly considered a revival of old relationships based on ideology.

It is rather a new interest relevant to global realities. As an example, Russia is not the only key player in Africa and we need to understand the Chinese have made heavy investments across Africa and China has already established its military presence in Djibouti. In that context, the modern interest of Russia in Africa is much strategic than what USSR used to maintain.

Q: Russia's trade has increased but it is, largely, one-sided. In your opinion, what could be possible reasons why Africa's trade and other forms of economic presence still low in the Russian Federation?

I think this mainly due to the lack of organizational skills of foreign services. You need to understand that economic presence and getting the maximum economic benefits are always rooted in the power of bargaining from bureaucracy. Especially in a situation, where small countries are dealing with a superpower, the bureaucracy of small powers always need to walk the extra mile. This purely visible when Sri Lankan authorities had to push Russia for a fair deal of exporting Sri Lankan tea to Russia in 2017.

Russia is a state that always chooses realpolitik in its global relations. From a theoretical IR perspective, Russia has chosen strict realism in its relations. Especially, new Russia under Putin strives for more practical benefits rather than seeking ideal outcomes. However, we cannot entirely discard Russia as a country that has no interest in sustainable development goals as 2015 UN sustainable development goals already have been a part of the Russian national agenda.

It’s a pity that the Russian presence in Africa has many business objectives than preserving sustainability. The recently held Sochi summit was an example of it as it’s played a key role in increasing Russian arms deals in Africa.

Q: At least during the past decade, Russia has a plethora of bilateral agreements still not fully implemented in Africa. In Sochi, Russia and Africa have further signed the Summit Declaration. What are your final comments here?

Lack of implementation of agreements is not only a problem that appears only in Africa, but even the bilateral agreements signed between Russia and some of the South Asian states also have not yet been fully implemented. However, as I stated earlier, Sochi summit was not a just meeting as Russia has shown a serious interest in “competition for cooperation” in Africa, in the recent past through military cooperation and seeking access to natural resources.

Q. How should African leaders show reciprocal support for Russia's renewed interest in the continent, especially in SDGs in Africa?

The rapport maintained by Moscow with African states during USSR used to be a much mutually beneficial one for both parties than how West exploited Africa’s resources. However, the decline of the USSR curtailed Russia’s presence in the continent. Yet, there are some elites still involved in the state machineries in African states who have the nostalgia for Soviet legacy. In such a context, the latest interest sparked in Moscow towards renewing their ties with African states has some significance.

In particular, modern Russia will use their old influences to penetrate into Africa. But, we need to understand that the geopolitical map has been changed in Africa since its past as again Africa has become a place for scramble among modern superpowers. As an example, there is a strong French military presence in Mali and the US too has its influence over Africa through its permeant base in Djibouti. In such a win-win situation, leaders in African states should reciprocate to the Russia alliance without betraying their sovereignty.

In terms of accepting the deal coming from Moscow, African leaders need to be much cautious about the demands of Russia. Since Russia fell under sanctions and also since its confrontation with West, Russia has been putting a great strength to make its relations formidable in Asia and African regions. However, the vision of African leaders must be much focused on gaining Russian support without agitating other powers. It is a fact beyond doubt, still, Africa receives more foreign aid from the EU and World Bank and making an unconditional rapport with Moscow may hinder Africa’s relations with the West.