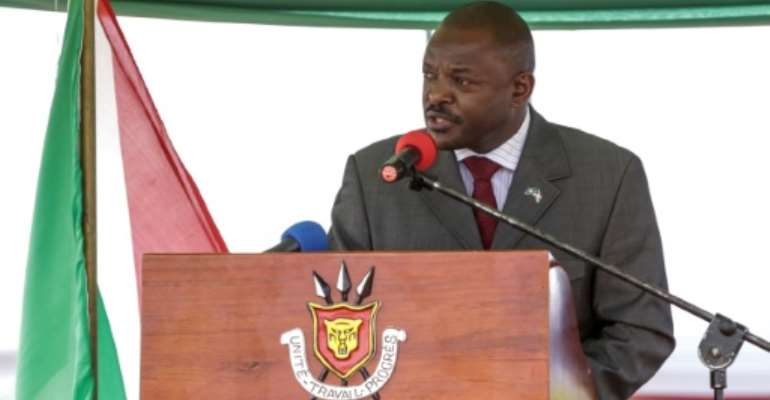 Burundi's President Pierre Nkurunziza has ruled since 2005. By STR (AFP/File)

Burundian President Pierre Nkurunziza on Saturday reaffirmed he will not contest next year's election, despite scepticism from the opposition, and the ruling party yet to name another candidate less than six months from polling day.

The long-serving president sought and won a controversial third term in office in 2015, defying constitutional limits, and plunging the country into a deadly political crisis and economic recession.

But the 56-year-old leader -- whose tenure has been marked by allegations of grave rights abuses and a crackdown on political freedoms -- announced in June 2018 he would not run in elections set for May 2020.

Just a month earlier, constitutional changes in Burundi had extended presidential terms, and many believed Nkurunziza had backed the amendments allowing him to stay in office until 2034.

But in an end-of-year address Saturday to the army and police, Nkurunziza -- who has ruled since 2005 -- again signalled he would stand down when his term expires next year.

"This ceremony is my last. Next year, at this time, it will not me who will speak. The ceremony will be for a new head of state," the president said in Gitega, where the government this year moved its political capital from Bujumbura.

However the CNDD-FDD, Burundi's ruling party, is yet to nominate another candidate in his stead. Nkurunziza has described himself as a "guide" to the party.

The opposition fears Nkurunziza might be the only name put forward by the party, risking a repeat of the civil unrest in 2015 that left 1,200 people dead and drove 400,000 from their homes.

Pancrace Cimpaye, a leader from the opposition MSD party, said Nkurunziza should name his successor to soothe fears his party will again turn to Nkurunziza.

"On that day, Pierre Nkurunziza will say he has responded to the will of the people and the party," said Cimpaye, adding the party had just two months to nominate someone else.

The violent aftermath of the last presidential election made Burundi a focus of an investigation by the International Criminal Court for alleged murders, rapes, tortures and disappearances.