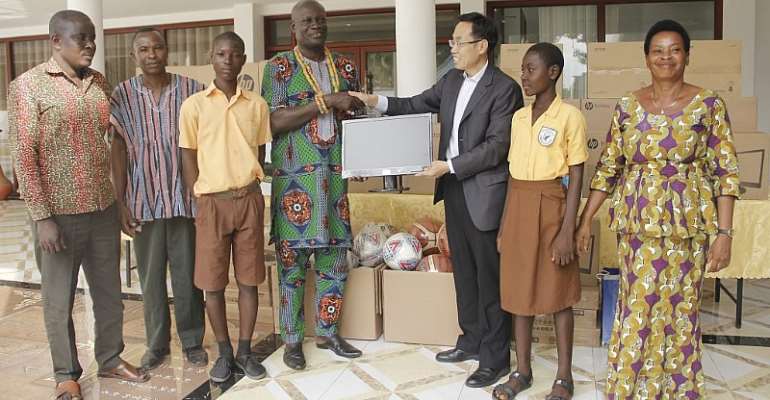 Chinese Embassy in Ghana has donated desktop computers, laptops, electronic printers among other information technology equipment to basic schools in the Osudoku Traditional Area in Accra.

The donation comes as a fulfillment of a request sent to the embassy by the leadership of the traditional area last year.

On Thursday, the Chinese Ambassador to Ghana, Shi Ting Wang welcomed representatives from the Osudoku Traditional Area, led by Nene Ogah Osuagbo I, sub-chief at the Osudoku Paramountcy in charge of International Relations, Diplomacy, and Development, at the old Chinese Embassy premises in Accra, where he officially presented the equipment to them.

In his remarks, the Chinese Ambassador stated that China held education in high esteem and this was evidenced in their efforts to support Ghana's educational sector, adding that the donation is a form of investment not only in the educational sector of Ghana but also in its future.

He assured that China, having enjoyed a very good relationship with Ghana over the years, would not hesitate in lending a helping hand to her in any way possible to help in its development.

Wang also urged the Osudoku officials to ensure that equipment were well maintained and used for their intended purpose so that they serve the needs of the beneficiaries for long.

Receiving the items, Nene Ogah Osuagbo I relayed the gratitude of the leadership of the Osudoku traditional area to the Chinese Embassy for responding swiftly to their request and assured that, the gadgets would be used for their intended purpose.

He said that the request for the gadgets was to give the younger generation a strong I.T foundation so that they would be well equipped technologically in future.

Prior to the donation, there was a brief meeting between the Chinese Ambassador and officials from the Osudoku Traditional Area.

Key among some of the issues discussed was the need to strengthen the Ghana-China relationship beyond its current level, considering the many impacts China was making in various sectors of Ghana's economy through various interventions such as the introduction of the study of the Chinese Language in basic schools in the Osudoku Constituency and the formation and inauguration of the Osudoku Ghana-China Friendship Society.

Wesley Girls' brouhaha: We’ll cooperate with authorities to ...
17 minutes ago