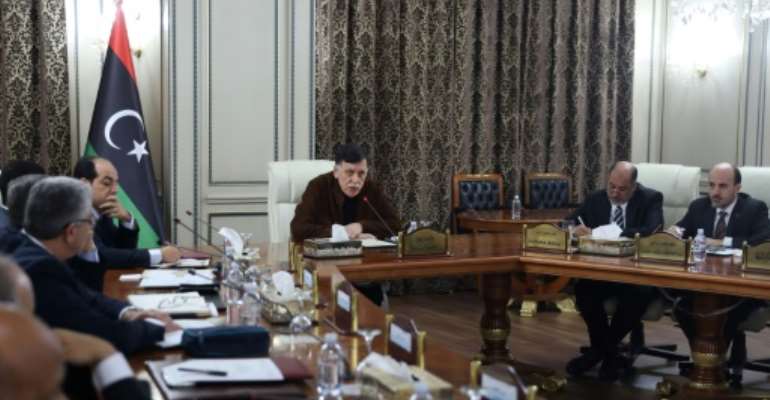 Libya's UN-recognised Prime Minister Fayez al-Sarraj (C) presided over a cabinet meeting where the implementation of a military deal with Turkey was 'unanimously approved'. By - (AFP)

Libya's UN-recognised unity government on Thursday approved the implementation of a military deal with Ankara, paving the way for a bigger Turkish role in the war-torn country.

Turkey has already supported the Government of National Accord (GNA) in its fight against rival forces of east Libyan strongman Khalifa Haftar, who launched an offensive in April to seize Tripoli from the GNA.

Mired in chaos since the NATO-backed uprising that toppled and killed dictator Moamer Kadhafi eight years ago, the North African country has become split between bitterly opposed administrations in the east and west.

Each side is backed by rival regional players, with the United Arab Emirates and Egypt assisting Haftar and both Turkey and Qatar openly supporting the GNA.

Haftar's push to seize Tripoli from "terrorists" backing the GNA stalled on the edges of the capital.

The two sides have since been locked in a bitter stalemate, with at least 200 civilians and more than 2,000 fighters killed since April, according to the United Nations.

Turkey's President Recep Tayyip Erdogan said on December 10 that Ankara was ready to send troops to Libya to support the GNA in light of a deal sealed last month with GNA head Fayez al-Sarraj.

"If Libya makes such a request from us, we can send our personnel there, especially after striking the military security agreement," he said.

On Thursday, the GNA said its cabinet, in the presence of military officials, had "unanimously approved the implementation of the memorandum of understanding on security and military cooperation".

It gave no further details about the terms of the agreement or the assistance Ankara could provide to pro-GNA forces.

But the UN says Turkey has already supplied them with tanks and drones in recent months.

UN experts last week published a 400-page report which concluded that an arms embargo placed on Libya in 2011 was "ineffective" and that Haftar's military campaign had "unleashed new transfers of military equipment" to Libya. 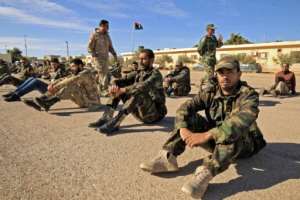 Fighters loyal to Libyan strongman Khalifa Haftar have failed to take the capital Tripoli more than eight months after the start of the assault, with the fighting coming to a standstill on the ground. By Abdullah DOMA (AFP)

Egyptian President Abdel Fattah al-Sisi, a key Haftar backer, slammed the deal between the GNA and Ankara, saying control of Libya was "a matter of Egyptian national security".

Cairo's relations with Ankara and Doha have been fraught since Sisi led the 2013 military ouster of Islamist president Mohamed Morsi, who had been backed by Turkey and Qatar.

The UN has said an international conference will be held next month in Berlin to pave the way for a political solution to the country's grinding conflict.

Despite the support of regional backers, forces loyal to Haftar have so far failed to take the capital.

Haftar announced last Thursday there would be a "decisive battle" over Tripoli, but the pledge has yet to come to fruition.