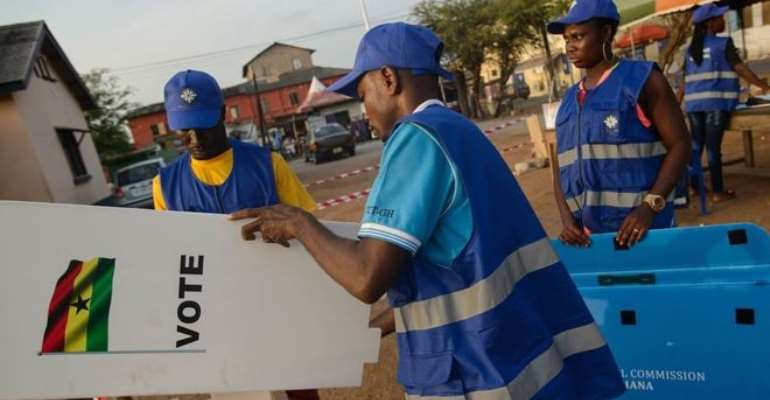 The December 17, District Level Elections (DLE), is being hailed as one of the most well organised, peaceful and successful.

Apart from a couple of communities, where the people decided to boycott the elections in protest against their bad roads, everything went smoothly.

Significantly, there were no reported technical glitches and every voter out there, who wanted to vote was able to freely cast their ballots.

This success, of course, was not by accident but something that came through proper planning by the body charged with the management of elections in the country – the Electoral Commission (EC).

Voting for assembly and unit committee members were held in 31, 851 polling stations across the nation and for such an exercise to have been free from any breaches of the electoral laws, tells a lot about the planning that went in.

Electoral Materials
Organizing an election, which involved in excess of 50,000 candidates, cannot be an easy task, especially, when you have to match pictures and names within a short space of time.

The possibility of mixing up names, pictures and positions was always there and therefore for the polls to have been held throughout the country except for only three areas – Sokpayiri, in the Wa Municiplaity, Moshie Zongo in the Tamale Metropolis and Awutu Senya West, is a huge achievement, which cannot be downplayed.

The in-house committee set up by the Commission, comprising of staff of the Commission, to coordinate all aspects of the electoral cycle procurement, printing of ballots and other vital activities did an exceptionally good job.

The committee, chaired by Mrs. Mensa, gave timelines to all the unit and department heads, held weekly peer review meetings to make sure that everything was on track. This promoted a sense of ownership and the can do spirit among the staff.

Another novelty, was the decision to assign the deputy directors of the EC to monitor and supervise the printing of ballots for their regions.

This ensured that they worked around the clock to review all drafts and to make the necessary corrections before printing was done. That helped to eliminate printing errors.

Again the ballots, registers and other materials were sent well ahead of time and that also allowed the districts and regional officers to carry out thorough checks and deal with any anomalies.

Persons with Disability (PWD)
Mindful of the African Charter on Democracy Elections and Governance (ACDEG), which aims at promoting participation of social groups with special needs, including persons with disability (PWDs), in the governance process, the Commission made special arrangement for PWDs

On the day of voting, such persons did not have to join long queues and the EC provided tactile ballot jacket in addition to the ballot paper for the visually impaired.

According to the report by the Coalition of Domestic Election Observers (CODEO) 93.3 per cent of polling stations in the just ended DLEs were accessible to PWDs and the elderly.

Mr. Albert Arhin, the National Coordinator of CODEO, in a signed statement, said the Coalition also observed that there were candidates’ agents present in 92.4 per cent of polling stations, its observers visited.

It added that 92.8 per cent of the polling stations were set up in a manner that ensured voters could mark their ballots in secret.

CODEO Observers were allowed to observe the elections at all polling stations by poll officials.

Security
One of the major stakeholders that the EC management started planning with, regarding its activities was the Police Administration and other Security Heads.

This led to re-activation of the Elections Security Task Force, with clear mandate to plan and ensure that there was adequate security protection before, during and after the elections.

The Task Force served as the frontline security for election intelligence gathering and analysis in support of law enforcement by the national security.

A total of over 48,000 security officers were deployment for the elections.

It is therefore not surprising the security heads are casting the DLE as one of the most successful and peaceful.

Assistant Commissioner of Police (ACP David Eklu, the Director-General of Public Affairs of Ghana Police Service, told this writer that the few significant issues that came up at Ekumfi Imuna and Aowin, were expertly handled by the security agencies.

It would therefore not be wrong to conclude that the election went smoothly and effectively.

The Jean Mensa-led EC, by its actions – stakeholder engagements, is leaving nobody in doubt about its unswerving commitment towards performing its assigned task with integrity.