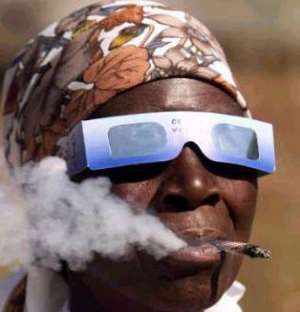 ... 0830 to 0930 GMT Accra, March 29, GNA - Ghanaians will today, Wednesday 29 March, witnessed the rare occurrence of solar eclipse, which officials hope will sell the country to the outside world. Ghana is one of eight African countries to experience the solar eclipse. The others include Togo, Benin, Chad, Nigeria, Niger and Egypt. Scientists predict that the duration of the solar eclipse on March 29, would be between the hours of 0830 and 0930. To experience this rare phenomenon, hundreds of tourists have arrived in the country and most hotels along the coast of Ghana on the path of the solar eclipse had been reported fully booked. A total solar eclipse also referred to as the eclipse of the sun occurs when the umbra of the moon shadow touches on the earth surface, blocking the sun's light from reaching the earth. The last time Ghanaians saw the phenomenon was about six decades ago. The duration of a total solar eclipse could be as short as a few seconds or as long as eight minutes.
The eclipse of the sun on March 29, 2006 would move from the north-eastern coast of South America and across the Atlantic Ocean to reach Ghana, crossing Southern Ghana, Southern Togo and Central Benin, South-Western and Central Nigeria, Niger, Chad, Libya and Egypt. Of the seven countries in Africa, Ghana would be the first to experience it in the morning around 0908 hours. Scientists have predicted that the period would last for about three minutes 44 seconds. In Ghana, the first communities to observe the event would be the coastal settlements between Assini and Busua in the Western Region with Busua Beach Hotel being one of the best places in the neighbourhood for tourists to get more than three minutes of experiencing the twilight darkness.
Other areas to experience the eclipse include Agona, Sekondi-Takoradi, Ho, Cape-Coast, Koforidua and Asikuma. The event would also be experienced at Atobiase, Bogoso and Prestea, all in the Western Region and across the Volta Lake through Jasikan and Pampawie in the Volta Region. The South Limits start at 4.5 degrees north in the Gulf of Guinea through Saltpond, Winneba, Accra, Tema, Ada, Woe, Keta and Dzodze.
Along the coast, some high grounds will offer some advantages - two spots on high hills at Anomabo, McCarthy Hill, overlooking the Densu Plain, Shai Hills and Aburi Hills at Peduase will also be possible viewing spots.
Accra would experience the passing shadow for about two minutes 58 seconds. However towns in the northern parts of Ghana would see the Eclipse partially. The National Planning Committee has sensitised the public about the eclipse and on how to ensure an incident-free event. It also created awareness of the importance of protecting the eyes, as observing an eclipse with the naked eye could cause an irreversible eyes damage. A siren would be sounded to alert the public about the occurrence of the eclipse and the need for everyone to watch it with the prescribed solar shades to prevent damage to the eye. 29 March 06
Attention Subscribers: Item 06 ends our first transmission.

Bawumia Is Making Comedians Jobless With His Economic Jokes ...
50 minutes ago