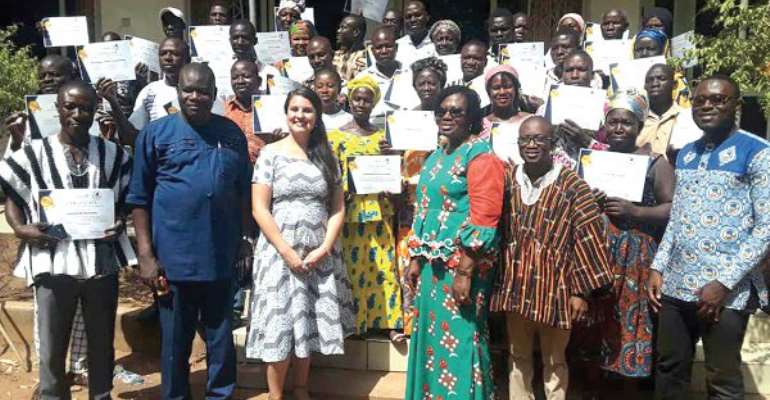 A project has been launched to step up education on peace to prevent election motivated violence and conflict before, during and after the 2020 general election in the Nanumba North Municipality and the Nanumba South District in the Northern Region.

It also seeks to help contribute to the lifting of the curfew imposed on the Bimbilla township to enable the population, especially women and minority ethnic groups to freely participate in the 2020 parliamentary and presidential electioneering activities.

To ensure the success of the project, a 30-member community based peace animators, 15 from each of the two districts have also been established to collaborate with the District Security Council to conduct surveillance and prevent conflicts during the 2020 general elections.

The peace animators are to promote and help to consolidate the relative peace in the communities and also inform the security agencies of any potential threat to peace and violence before, during and after the 2020 general elections.

Dubbed, “Empowering Peace and Inclusive General Elections in Nanumba land”, the project is being implemented by SEND, Ghana, a non-governmental organisation working to promote good governance and gender equality in Ghana with the support of the Canada Fund for Local Initiatives (CFLI) of the Canadian High Commission in Accra.

animators
Speaking at the launch of the project and the District Peace Animation Networks (DPAN) at Bimbilla, the capital of the Nanumba North Municipality last Wednesday, the Board Chairperson of SEND, Ghana, Madam Janet Adama Mohammed, cautioned the peace animators against aligning themselves to political parties.

She noted that although elections in Ghana were generally peaceful, it was always not without pockets of violence, especially in conflict prone areas such as the Nanumba areas, hence the need to strengthen capabilities of the community-based peace animators in preparation for the 2020 general elections.

The Municipal Chief Executive for Nanumba North, Mr Abdulai Yaquob, called on the peace animators to apply themselves diligently to the work they had voluntarily agreed to do.

That, he said, would ensure the attainment of the objectives of the project.

“I urged you to be peace makers in your various communities and you will be doing a great disservice to the nation and more importantly the sponsors of the project if it turns out that you are rather the source of disagreements and conflicts”, he stated.

Mr Yaquob pledged the support of the assembly to the project and gave an assurance that the assembly will resource the security agencies to enable them secure the area to ensure an incident free elections in 2020.

A representative from the Canadian High Commission, Ms Alicia Sosa said the high commission decided to support the project to ensure that a peaceful environment was created for the peaceful conduct of the elections and to ensure inclusiveness in the electoral process of the country.