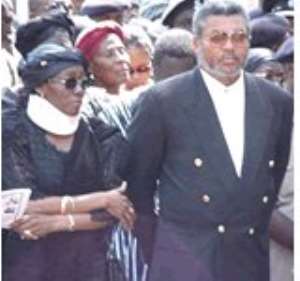 Former President Rawlings, according to the Heritage newspaper, has already pitched camp with his wife, Nana Konadu Agyemang Rawlings in her desire to be Ghana's first woman president leaving in the lurch his former vice-president, Prof. Mills.

The Heritage paper has gathered that agents of the former first lady are already on the ground vigorously positioning 'Madam' at vantage point to take over the party's flagbearership position.

The Heritage can reveal that the former president had drummed in the ears of the delegates at the party's congress last year that Prof. Mills had lost in the 2004 election because the then party chairman, Dr. Asamoah had used his position to starve the party's former flagbearer of the needed financial and logistical support in the run-up to the election.

This message, according to party insiders has won the former vice-president a lot of sympathy from grassroots of the party, putting him at an advantageous position to capture the position of the flagbearer for the 2008 election, no matter the desires of the party's founder.

Party delegates have hinted to the Heritage that Prof. Mills is the most familiar face at the party's grassroots and he is likely to pull a shocker if he is able to politically survive within the NDC up to the congress. His supporters however are nervous about the manoeuvrings of the former President and the former first lady. Alhaji Mahama Iddirsu is the next formidable contender in the race apart from Prof. Mills.

Mr. Eddie Annan, Mills' bankroller, supporter and a close pal was initially encouraged by the former President to contest as part of their strategy to outsmart Prof. Mills. However, with the strategy against Mills backfiring, moneybag Eddie Annan has still maintained his posture and he is likely to contest barring any last minute horse-trading. Spio Garbrah, former cabinet minister under the NDC regime has already hinted his desire to battle for the NDC's flagbearership firing salvos against Mills and questioning the reasons behind his two defeats.