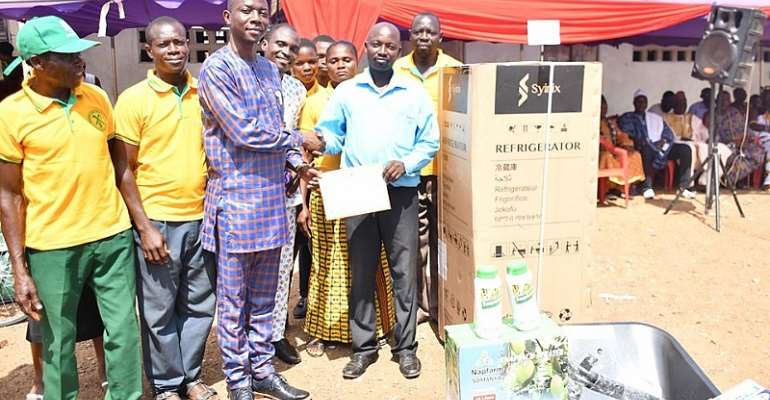 Some 22 farmers were presented with awards at the 35th National Farmers' Day celebration at Kwahu Praso II in the Kwahu South District of the Eastern Region.

A 52-year-old Haruna Longman Gyabre of Adawso emerged as the overall district best farmer. He was presented with a certificate, a tricycle, a wheelbarrow, knapsack spray, watering can, a full piece of cloth, a Wellington boot, raincoats, a radio, machetes and a pickaxe.

He said agriculture plays a vital role in the transformation of the economy and farming must be encouraged at all times.

In the Lower Manya Krobo Municipality George Tetteh from Oborpah West was adjudged as the overall best at a ceremony held at the forecourt of Kpong Presby School.

The MCE, Simeon Tetteh, said the NPP government had made farming a lucrative venture, adding that the government would invest more in the agricultural sector and also motivate farmers to do more.

At Atiwa West District, a 52-year-old Issah Labiba was named as the overall best farmer.

He was presented with a certificate, a motorbike, a radio, a chest freezer, a spraying machine, two sets of Wellington boot, four machetes and a wheelbarrow.

Isaac Akomaning Asamoah, DCE for the area, disclosed that under the government's flagship “Planting for Food and Jobs” programme, about 19,600 palm seedlings had been distributed to 202 farmers in the Atiwa West District.

He added that about 788 farmers in the Atiwa West District had benefited from the “Planting for Food and Jobs” in 2019. Besides, he urged the youth to show more interest in farming.