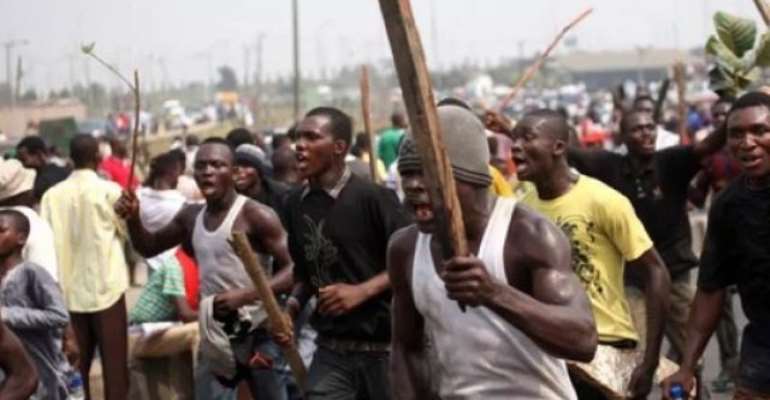 Findings from a survey conducted by the Center for Democratic Development (CDD) have revealed that vigilante activities are growing at an alarming rate in parts of the country despite the introduction of the Vigilantism and Related Offences Act.

The report found that all of the activities and the associated groups, are related to the two major political parties, the National Democratic Congress (NDC) and the New Patriotic Party (NPP).

The report also found that women were beginning to play key roles in such vigilante activities.

“One of the things that we found was that political vigilantism is now a business venture where people form groups and offer their services to the highest bidder…Also, political vigilantes are not only formed by political parties, they are either formed like social groups or as a business venture. All the groups that we had were affiliated to the NDC and the NPP,” said Mildred Adzraku a research analyst at CDD Ghana.

She added that, “beyond what women are known to do, as in support in acting as peace ambassadors, women are now instigators of electoral violence and they are enablers and informants for some of these groups.”

On the cause of the electoral violence and vigilantism, the report found that the major causes were the ‘winner-Takes-All’ politics, unemployment and poverty as well as politicization of chieftaincy disputes.

The report also stated that the seeming mistrust for state institutions such as the Electoral Commission and police are motivating the formation of vigilante groups in the country.

Political vigilante groups with affiliation to the two leading political parties, the NDC and the NPP have been at the forefront of unleashing torrents of violence in various forms across the country and this remains a major source of concern for Ghanaians.

The two leading political parties are currently being engaged by the Peace Council to find a way to address the menace of political party vigilantism.

Before that dialogues are concluded, President Akufo-Addo, gave his assent to the Vigilantism and Related Offences Act, 2019, which bans acts of vigilantism in the country.

The Act was passed by Parliament after the president gave indications that he will be forced to use the legal option to address the phenomenon of the two parties fail to meet over the issue.

Per the new law, “a person who directly or indirectly instigates or solicits the activity of a vigilante, facilitates or encourages vigilantism, or conceals a vigilante to avoid lawful arrest, commits an offence, and is liable, on conviction, to a term of imprisonment of not less than ten (10) years and not more than fifteen (15) years.”