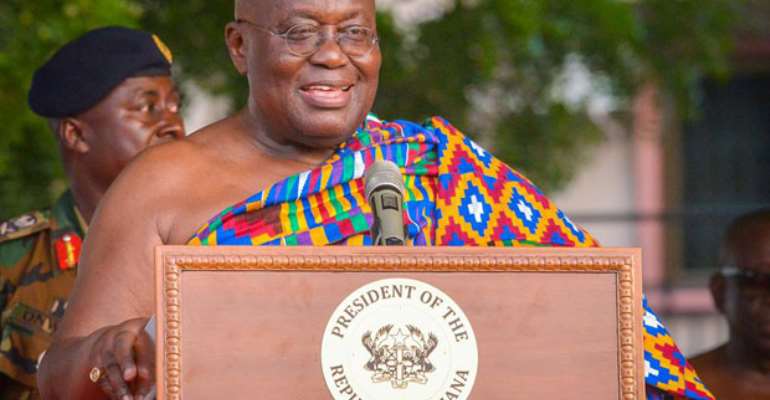 The 2020 budget presented by the Finance Minister, Ken Ofori-Atta on Wednesday 13th November, 2019, has expectedly received mixed-reactions from a cross section of Ghanaians, but I, in particular, have an unflinching admiration for Akufo-Addo's government economic team for reversing 15.4% inflation to 7.6%, and moving a miserable economic growth of 3.4% to around eight per cent.

Much as we cannot accept the widely held notion that politics is a dirty game, it would not be farfetched to suggest that the political terrain is full of inveterate propagandists and manipulating geezers.

Of course, unprincipled politicians are not limited to Africa; it is a global phenomenon, as a matter of fact.

However, in our humble opinion, it is our part of the world (Africa), where political insobrieties and vague rhetoric are so prevalent.

Of course, the opposition is obliged to put the incumbent government on its toes. But does the opposition NDC have to nag, grumble and criticise for criticising sake?

Notwithstanding the unfailing skepticisms by the opponents of Akufo-Addo's administration, Ghana's economy has received thumbs up from the likes of the Director of the International Monetary Fund (IMF), Ms Christine Lagarde, and the United Nations Special Rapporteur on extreme poverty and human rights, Philip Alston, both of whom have been commending the Akufo-Addo's government on its excellent economic performance in less than three years in office.

In fact, President Akufo-Addo is 'the Moses' of our time. He was sent by God to take Ghanaians to the promise land.

Biblically, Moses was a visionary leader. We read in Exodus that he was a shepherd – he had a modest, humble and patient upbringing. Moses employed his humility, patience and tolerance when he had the opportunity to speak to God. He kept watching as thousands of sheep grazed the fields. Moses noticed that one sheep was missing and went off to look for it, finding it at a distance apart.

When the sheep had finished drinking, Moses lifted it onto his shoulders and carried it back to the flock. When Jehovah God saw this, he became aware that Moses was a man of reason, empathy and selfless devotion, a man truly worthy to lead His people; a man who would put his empathetic qualities at the disposal of the needs of his subordinates. After all, no one was keeping an eye on Moses; Moses could easily have thought to himself, “why be concerned with one sheep when there are thousands?”

Take, for example, in 2017, the Bloomberg News predicted Ghana to become “Africa's fastest-growing economy in 2018” and Ghana was proclaimed “Star of Africa in 2018 Lenders' Economic Forecasts”.

And, in reporting on the same fiscal policy achievements, Le Monde pointed out that “Ghana's economic success is not just as the result of an oil-driven boom, but is also due to prudent economic management, an entrepreneurial population, the role of traditional leaders and good governance.”

The latest on the list of observers on Ghana's propitious economic standing is the Nigerian scholar, who gave a presentation at the NDC's most recent forum, in which he emphasized Ghana's thriving economic growth under the NPP government.

In assessing Ghana's auspicious economic position, the Director of the International Monetary Fund (IMF), Ms Christine Lagarde, observed that the Ghanaian economy is in a better place than it was in the previous years under the John Dramani Mahama's administration.

Ms Lagarde thus opined that the Akufo-Addo's government had made important gains towards macroeconomic stability, including inflation, which had declined to a single digit and now within the Bank of Ghana's (BoG's) tolerance band; buoyant growth, averaging about five per cent between 2015 and 2018 and over six per cent in 2017-18) and a primary surplus in 2017 for the first time in 15 years (IMF 2018).

In the same vein, following his working tor in Ghana, the Special Rapporteur on extreme poverty and human rights, Philip Alston, observed: “Ghana met the targets for halving extreme poverty and halving the proportion of people without access to safe drinking water, and it achieved the goals relating to universal primary education and gender parity in primary school.

Some of us, as a matter of principle cannot end our arousing disgust anyhow and anytime soon over the erstwhile NDC government's irreversible incompetence and the corrupt practices which destabilized Ghana's macroeconomic indicators.

One cannot help but to laugh off the minority NDC's renewed zeal to expose and prevent perceived incompetence and corruption in the NPP administration.

Strangely though, the minority NDC faithful are gleefully hopping around the globe (from United States to Luxembourg), with a view to detecting a perceived corruption by the Akufo-Addo's government. How strange?

Let us be honest, if they were that good at detecting and preventing sleazes and corruption, how on earth did they go to sleep over the scandalous corruption cases involving the infamous Bus Branding, Brazil World Cup, the Ford Expedition vehicle, GYEEDA, AZONTABA, SADA, SUBAH, the purported $300 million debt incurred on the faded STS housing deal, the dubious Embraer 190 Aircrafts and hanger for the Ghana Armed Forces and over a $100 million oil revenue loss between 2011 and 2013, as reported by the Public Interest& Accountability Committee?

Kweku Baako Jnr was absolutely right when he once stressed that the minority NDC operatives were seeking to “internationalize their incompetence.”

Dearest reader, isn't it somewhat ironic that the opposition NDC operatives have soon found their voices and squalling and scolding at the rooftop about alleged sleazes and corruption?

To some of us, it is an illustrative case of “let us give a dog a bad name and hang it.” Obviously they are trying their level best to bring to the fore the non-existent sleazes and corruption. How pathetic?