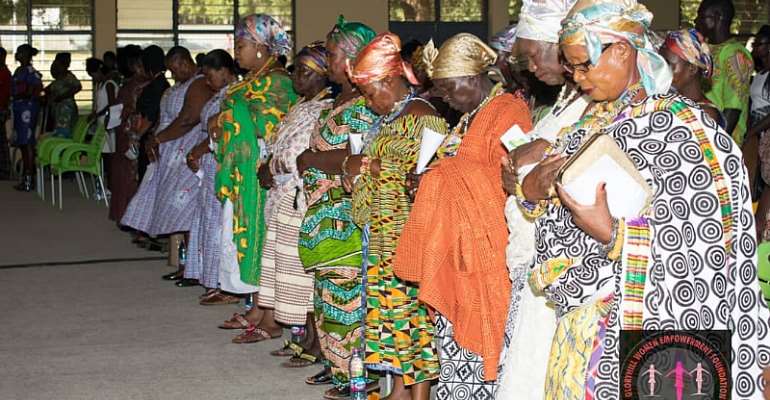 A day’s seminar organised by Gloryhill Women Empowerment Foundation has taken place in Kete Krachi in the Oti Region.

The Programme which sought to encourage women to take note of important issues which directly or indirectly affect their aspirations for leadership, took place on Thursday 28th November, 2019 specifically at Kete-Krachi Senior High under the theme, “Breaking the Glass Ceiling”.

The programme began with some soul-soothing music from Mega Praise that prepared the minds of participants for the discussions ahead.

The conference was set in motion with an opening speech by the Chief Executive Officer and Co-founder of Gloryhill Women Empowerment Foundation, Gloria Dede Abiwu.

She welcomed participants touching on the purpose of the conference and giving credence for their time and willingness to contribute towards discussions at the conference.

She identified that women in general, based on the structures of our societies are confronted with serious challenges on a daily basis that seem to stifle their development.

She mentioned that Gloryhill Women Empowerment Foundation is fully committed to turning around the lives of women for the best through seminars, vocational training and mentorship programmes.

The main purpose for the seminar as identified by Mrs. Abiwu, was to increase the mental fortitude of participants to move out of the space of just being home managers to being resourceful people who can manage affairs at even the highest levels of leadership by giving them exposure through the interactions that would take place at the seminar.

This was then followed by a discussion on the female reproductive system led by Madam Millicent Asirifi, Tutor at Kete-Krachi Midwifery Training College on behalf of the Principal of the school who could not make it to the programme.

Apart from the vulva, any other part of the reproductive system which is not visible on the outside must only be seen, accessed and examined by a midwife or specialised and qualified health personnel.

Speaking on the theme, "Breaking the Glass Ceiling," the NADMO Director for Krachi West District Ms. Benedicta Akadusi mentioned some few challenges women have to face on their journeys to leadership. Using her own story of how she made it to her current position, she encouraged the younger women to stay focused in their studies and whichever job their hands find doing.

She also demystified the apprehension that some people show towards women’s empowerment programmes, insisting that, women empowerment is for women’s advancement in knowledge towards things that make them function better in society thereby being of greater value to society and not a tool to fight men.

The only male Speaker at the seminar, Mr. Daniel Osei Tuffuor, Executive Director of ExLA Group, organisers of the Young African Women Congress, took his turn to speak on a critical topic for women’s development. He spoke on entrepreneurship and how women can leave the space of dependency to being self-sufficient.

He identified four important characteristics of entrepreneurs which he encouraged every woman to desire and achieve. They include having vision, innovativeness, taking risks and being able to organise and manage resources effectively. He added that the focus of entrepreneurship is more of trying to solve a problem rather than for financial gains. Nonetheless, money always comes as a by-product of providing solutions through entrepreneurship.

The panel discussed various issues based on the theme with particular focus on how women can break-away from the mental prison as less capable beings. Participants were also given opportunities to share their thoughts on the discussions and asked questions which help to dissect the issues further.

The Oti Women Leadership Seminar is set to be an annual event to help nurture young women who are bold and ready to make a difference in their environments and beyond.