UEW Kumasi Campus To Be Renamed 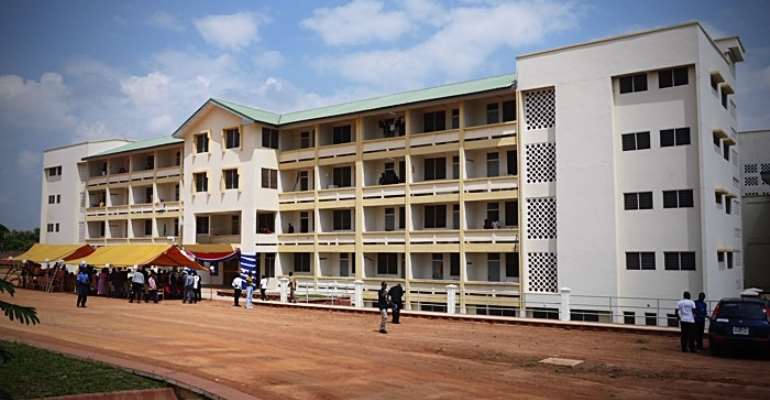 President Akufo-Addo has announced that the Kumasi campus of the University of Education will become an autonomous institution under the name, University of Skills and Entrepreneurial Development.

During a sod-cutting ceremony at the school for the construction of a Technical Examination Unit at the College of Technology Education which is scheduled to be completed in 12 months, President Akufo-Addo noted that plans are far advanced in making the school an autonomous institution.

He added that the school will have other satellite campuses at various colleges of education to equip students in skills training.

“These are exciting times for our country. I am expecting [that] the Ministry of Education, [and] Council for Technical and Vocational Education Training (COTVET), will work hard to deliver the project on time and on budget so that we can gather for the commissioning of this facility.”

The Students Representative Council of the school at a news conference last week said the delay in making the school autonomous was impeding academic work.

The Vice-Chancellor of the University of Education Winneba, Rev. Fr. Prof Afful Broni who was also at the programme stated that the decision to make the Kumasi campus autonomous was a step in the right direction.

This development has been long overdue as the Minister of Education, Dr Mathew Opoku Prempeh on August 31, 2018, announced that Government intends to make the Kumasi and Mampong campuses of the University of Education together with eight other technical and vocational oriented Colleges of Education autonomous.

In keeping faith with the government's commitment to quality TVET, the President through the Minister of Finance made provision for the yet to be created University in the 2019 budget statement. UEW SRC laments delays in granting Kumasi, Mampong campuses autonomy

The Students Representative Council (SRC) of the University of Education, Winneba (UEW) Kumasi campus had complained about the continuous delays in processes to make the Kumasi and Mampong campuses of the University autonomous claiming it was impeding academic work.

The student leadership cited infrastructural challenges, lack of access to internet facilities, inadequate lecture space as problems facing students at the Kumasi and Mampong campuses of the University.

The SRC argued that the bureaucracy that was hampering the speedy infrastructural developments will be curtailed if autonomy is granted to both institutions.

The executives at a news conference highlighted key challenges faced by students at the Kumasi and Mampong campuses and attributed these challenges to the delays in granting autonomy to the institutions.

SRC President for the UEW-Kumasi campus, Boateng Samuel Clinton said “it is heart-wrenching to sit here today to illustrate the problems students face as a result of the inefficiencies in the Winneba system and the uneven distribution”.