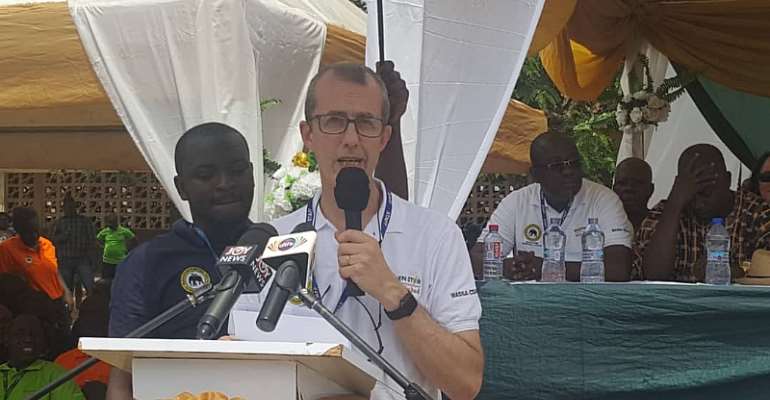 The MoU is expected to facilitate infrastructural and human capacity development in the twelve communities that host them.

Speaking at the launch and signing of the MoU at Akyempim, Thursday 21st November 2019, the Managing Director of GSR Wassa Mine, Shadrack Adjatey underscored the need for the MoU, saying it would bring solution to distrust that has sometimes entered the relationship between the company and the communities, over what the company is supposed to do for members of the host communities.

He said though GSR has since their existence at Akyempim been engaging with leaders of the communities on employments and contracts, there was still the need for the MoU, to state in clear terms their Corporate Social Responsibilities (CSR).

The three focused areas of the MoU which are all development driven, are Local Employment and Contracts, Golden Star Development Foundation Fund and Relationship and Sustainable Livelihood.

According to the elated Managing Director, the successful signing “is an undisputable fact that, this MoU will not only serve as a formalized contractual agreement, but will also provide clear roadmap to ensure effective management of employment and provision of platform to resolve conflict through dialogue, respect and recognition of each other’s views”.

Mr. Adjatey later advised those who would have any grievances with employment, to follow procedures laid out in the MoU for proper redress.

The Chief Executive for Golden Star Andrew Wray, on his part said the company will continue to carry out their operations in a responsible manner which will enhance socio and economic standards in host communities.

He believes that the MoU will cement the relationship between GSR and host communities, which will in turn bring strategic community engagement and development.

Commending Golden Star for the move, the Member of Parliament for Wassa East Constituency Isaac Agyei Mensah charged the company to give priority to graduates in the host communities, when it comes to accepting national service personnel and interns.

Later in the event, the company surprised its President Mr. Daniel Owiredu after it was announced the main entrance to the underground has been named after him.

The CEO, Adnrew Wray described the President of Golden Star Resources Daniel Owiredu, as one exceptional fellow whose “significant contributions has led to Golden Star’s success in Ghana.”

Mr. Daniel Owiredu was appointed the Executive Vice President Operations of the Company in 2013. He was subsequently appointed to the board in November 2014.

Mr. Owiredu, who previously served the Company as Senior Vice President Ghana Operations, has more than 30 years’ experience in the mining sector in Ghana and West Africa.

He has been with GSR since 2006 and has rose through the ranks to the current position due to his vast experience in the sector and his substantial contribution to GSR.