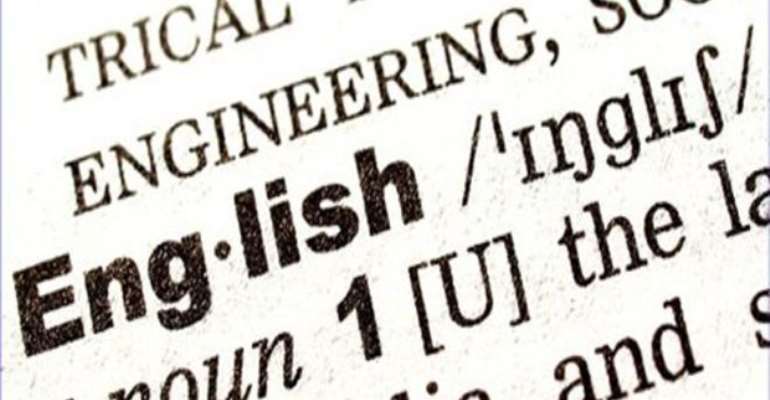 “Whoever is careless with the truth

in small matters cannot be trusted

I.K. GYASI in one of his last articles on English in The Chronicle (March 28, 2011) before he went on 'voluntary retirement' gave it a headline: “Careless use of English”. Should this headline, a doppelganger, be a teaser to pull him out of retirement, so be it. I.K. Gyasi noted: “I am simply alarmed at the very elementary mistakes that now crop up in the English of individuals, radio, television, and newspapers…” Anyone who insists on the correct use of English is made fun of: the man is “too known”, a simplified Ghanaian form for 'pedantic', 'showy', 'ostentatious', 'pompous', 'erudite', 'cerebral', 'over scrupulous', 'all-knowing'. The man is too 'showy', 'boastful', 'fastidious' and 'didactic'.

In 1994, Geoffrey Leech and Jan Svartivik wrote the book entitled 'A Communicative Grammar of English' in which the learned authors noted: “English is spoken as a native language by over three hundred million people (the population may have grown by about 2%) in the United States of America, Great Britain, Canada, Australia, the Carribean, Ireland, New Zealand and other places. This means there is a great abundance of English dialectical variation throughout the world. But when we come to the study of grammar in standard varieties of English, the differences are small.”

Thus, we may have our “own” forms, not as native speakers, but as people who have adopted English as a second language. If you are Kari Dako, the Norwegian who lectured English at the University of Ghana, Legon, you may call it “Ghanaianisms”. You may enjoy reading her book: 'Ghanaianisms: A Glossary'. You may encounter words like “Abyssinia” (fake, second rate). You may notice that people will not talk about “a piece of advice” or simply “advice” but will rather say wrongly: “The teacher gave the students an advice”.

You may go and be looking for somebody; but be careful not to tell the people around “I am after Miss Loc” What crime has she committed? You may encounter a celebrated holy man, and you may consider him anointed (NOT: annointed). You may have an encounter with the anointed man of God. How often do we not hear: “As at ten o'clock, all the seats had been taken”? Perhaps we may do better by saying “As of ten o'clock, all the seats had been taken”. And what about “the whole seats”? Certainly, it must be wrong to say: “the whole students” (all the students) but you can say “the whole school” (everybody included) OR “The whole farm was burnt; all the trees were affected (NOT the whole trees were affected).

In Julius Caesar, Marcus Antonius, while addressing the people of Rome, related how Brutus stabbed Julius Caesar: “…Judge, O you gods, how dearly Caesar loved him. This was the most unkindest cut of all”. You may have heard of “poetic licence” what some call “artistic licence” which in literature, means “the right assumed by writers to alter or modify rules of language thus deviating from conventional form in order (NOT: in other) to create a different but desired effect.” “Most” (superlative) should not go with “-est”, (another superlative). Remember the mood of Antonius. Brutus had reached the apogee of “unkindness”, and Antonius, the word-weaver used “most”, “-est” and “of all”. (He was writing iambic pentameter and he needed a line with ten syllables).

It is not for anyone to question a poet or a dramatist over his/her use of words. As Hamlet says; “There is nothing either good or bad, but thinking makes it so.” For the student, it is WAEC that makes it so. You cannot say “more better” (comparative) or “most biggest” (superlative); nor can you say: “the saloon car runs more faster than the bus” (BETTER: The saloon car runs faster than the bus”) You may be peeved at the way people use “serious”, thus, “You may not take someone seriously” (NOT: You may not take someone serious): “serious” is an adjective; “seriously” is an adverb.

I.K. Gyasi himself raises a caveat: “I can understand those who might think that some of us make too much fuss over a language that is not indigenous to us, and that it is about time we chose one indigenous language and used it, instead of English. It is clear that the English themselves do not always use English correctly. As far back as Saturday, April 30, 1988, the BBC stated in its news bulletin that 28% of British teachers of English had only the GCE O Level. As a result, schoolchildren coming out of school had poor knowledge of English…” So, should we be complacent? Remember an 'F' in English will be a bar to progressing in education.

We cannot forget the words of Michelle Pierce who gives three grammar rules we can (and should) break: “Ending a sentence with a preposition”. This, she thinks, is an archaic rule. “From where does this rule come” may sound insipid (no colour, no taste): “Where does this rule come from” sounds more natural. The second fiat is: “Beginning sentences with 'and' or 'but”. Why can we not begin a sentence with a conjunction? Michelle thinks beginning sentences with conjunctions is a great way to grab attention But there is a caution here: do it in moderation.

If you are a fan of Lil Win, you may celebrate or dote upon him for introducing a new smart locutions “I can't think far”; “I can't think madness”. Did he mean to say: I can't think right or I don't understand it? Former President Mahama in 2016 may have used Kwadwo Nkansah's phraseology in Cape Coast when he sought to debunk NPP claims that he had nothing to show for his rule in Ghana. Corita Kent thinks: “Words have life and must be cared for. If they are stolen for ugly uses or careless slang or false promotion work, they need to be brought back to their original meaning – back to their roots.”