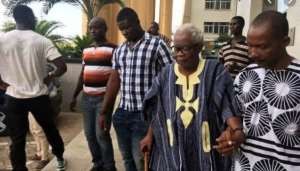 One of the most dreadful residues of colonization in Africa is the balkanization of cultures and ethnic groups. For example, more "Nzimas” live in Ivory Coast than Western Ghana (They are Ivorians but belong to the same ethnic group as Nzimas in Ghana). From Marrakesh to Maputo and from Ashanti to Zulu, colonial masters remorselessly subjected many cultures into Balkanization. Many Ghanaians received nature's benefaction of being born into cultural cross-road, and Ewes in Ghana are no exception. Nonetheless, the gaudy misconception that the entire territory of the present-day Volta and Oti Regions of Ghana used to be part of the UN Trusteeship territory of the Trans-Volta Togoland [TVT] needs to be corrected. President Akufo-Addo must deal ruthlessly with those confused people peddling lies about the TVT.

In 1623 William Shakespeare's play, Henry VI, Part 3, there is an exciting axiom: "The smallest worm will turn, being trodden on, and Doves will peck in safeguard of their brood." It means that the meekest and the most defenseless creature will defend itself when sufficiently provoked. When the 80 year old Charles Komi Kudzordzi whose grey hair is as old as erosions in a fishless desert was arrested a couple of months ago, over the plan declaration of Independence of Western Togoland, his face looked like someone hoisting the flag of permanent confusion or defeat. Fellow compatriots, the beginning of every socio-political upheaval, like the 1937 Nanjing (Nanking) Massacre in China, looks innocent. The president of the Republic must invoke his constitutional powers to protect the sovereignty and the territorial integrity of Ghana by arresting those individuals' masquerading as the secessionists, and hiding under the poorly and tawdry appreciation of history of TVT. It is historically antithetical to think that the entire territory of modern Volta and Oti regions of Ghana took part in the 1956 plebiscite over the Ewe Question.

D. E. K, Amenumey is a professor emeritus of history. He was this writer's history of Central, Eastern, and Southern Africa lecturer at the University of Cape Coast. He is not only an authority in African history but also a man of impressive erudition when it comes to Ghana's history. He is a prolific researcher and a writer of no mean repute. The argument over the TVT cannot be grounded on speculations. It must be historically and factually situated. On September 3, 2016, Ghanaians were freely endowed with providence benefaction when Emeritus Professor D. E. K Amenumey educated many of us on the afore-referenced topic. I humbly reproduce this article to help the government of Ghana, re-educate the general public over the history of TVT.

The brouhaha over Togoland Plebiscite. The historical fact

For the past several years, I have been dismayed and alarmed by the bogus and unsubstantiated claims being peddled both in writing and declamation about the scope and import of the plebiscite that the United Nations Organisation conducted in Togoland under British Trusteeship in May 1956.

I have been persuaded to rejoin to stop this misinformation that could trigger some rather serious consequences.

In the first place, it should be pointed out that the only people that were involved were the people of the then districts of Ho, Kpando, Buem-Krachi, Gonja, Dagomba (Dagbon) and Mamprusi (Mamprugu).

Most certainly, the people of Peki, TONGU, ANLO, SOME and related Ewe were not involved, because they had constituted part of the British colony of the Gold Coast right from the second half of the nineteenth Century.

Secondly, there is no iota of truth in the claim that the decision of the United Nations Organisation following that plebiscite was time-bound, that is it was to remain in force fifty years.

Thirdly, the demand and agitation for secession of all Ewe people of the Volta Region of Ghana and with union the republic of Togo has no basis in law or fact.

The decision to organise a plebiscite in British Togoland was actually the culmination of a series of developments that had occurred following the demand for unification by the Ewe people who found themselves split into three distinct political entities, namely, the Gold Coast Colony, Togoland under British Trusteeship and Togoland under French Trusteeship. There is no need to enter into so much details here. The reader can consult two publications by the author. These are (1) The Plebiscite in Togoland. A Historical Account in the UNIVERSITAS, an Inter-Faculty Journal, University of Ghana. Vol. 5 No. 2. (New Series), May/November 1976 pp. 126 – 140 and the second, The Ewe Unification Movement. A Political History. Ghana Universities Press 1989. Pp 374.

The facts
In 1954 the U.N. General Assembly decided that in view of the eventual revision or termination of the Trusteeship Agreements under which both Togoland territories were administered by Britain and France, steps should be taken, in the light of the particular circumstances of British Togoland, to ascertain the wishes of the inhabitants of British Togoland as to their future:

Accordingly, a mission was dispatched in August 1955 to ascertain the wishes of the people of British Togoland on their future. (U.N. Trusteeship Council official Records doc T/1206 ADD I. published in January 1956 as Doc T/1218. U.N. Visiting Mission to the Trust Territories of Togoland under French Administration and Togoland under British Administration. (Special Report on the Togoland unification Problem and the future of the Trust territory of Togoland.)

The Mission recommended that in view of the fact that opinion in the territory was markedly divided between two rival views, a plebiscite should be held to decide finally whether the people wanted integration with the Gold Coast or whether the territory should remain under trusteeship after separating from the Gold Coast until a practicable future status for it could be finally recommended.

It recommended specifically that the following questions be put at the plebiscite: a) Do you want the integration of Togoland under British administration with an independent Gold Coast? And (b) Do you want the separation of Togoland under British administration from the Gold Coast and its continuance under trusteeship pending the ultimate determination of its political future?

The Mission also recommended that the plebiscite results be determined separately in four more or less ethnically distinct areas. It suggested that in the northern section where opinion favoured integration with the Gold Coast in view •of the distinctive •ethnic and linguistic characteristics of its population and the general conditions in the area, its future should be determined not by a majority of the total .vote in the trust territory but by a majority of the votes within this area. In the southern districts of Ho and Kpando, the mission had observed divided opinion for integration and independence for a unified Togo.

Again in these districts the majority of the people was Ewe and the question of Ewe unification had exerted considerable influence on the course of events in the region. The Mission recommended that in this region also the results of the plebiscite should be taken separately and should determine its future according to the choice of its voters.

TheBuem/Krachi area contained populations of different ethnic composition and with other distinctive linguistic characteristics. Even within this district, the mission noted that in its northern parts opinion strongly favoured integration with the Gold Coast while in its southern parts, opinion was divided between integration and unification. The Mission accordingly recommended that Buem Krachi be divided into two separate areas to ensure the greatest possible measure of satisfaction for the aspiration of the population. The mission therefore recommended that the results of the plebiscite should be determined separately in the following four areas:

1. Northern section of British Togoland
2. Kpando and Ho districts together as one unit
3. Buem Krachi district north of the southern boundary of the Akan Local

The future of each of these units should be determined by the majority vote in each case. There should, however, be one exception to this, based on considerations of effective administration. If either the northern or southern section alone decided in favour of integration with an independent Gold Coast such wishes of the people of that part should be implemented when the Gold Coast attained independence, If one side or both favoured separation from the Gold Coast pending a further determination of their future this would necessitate the continuance of the trusteeship over that part of the territory pending the ultimate decision as to its future.

From the above, it is so evident that not all territories comprising present-day Volta and Oti regions of Ghana took part in the 1956 referendum. The referendum was not time-bound. Those calling for secession are dabbling in mischief. The government must act swiftly to enforce the laws of Ghana. This is also a reminder for African political leaders to eschew nepotism in political appointments. God Bless Our Homeland Ghana.