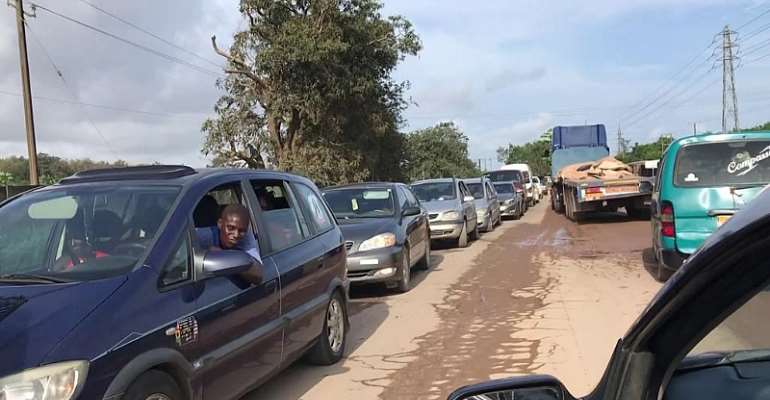 A lot of drivers were stranded on Saturday morning at the Ahwitieso portion of the Takoradi to Tarkwa road following a broken-down vehicle on the stretch.

The road, which has developed a lot of portholes, was blocked by the broken-down haulage truck causing a lot of traffic congestion on the road.

Passengers of some commercial vehicles en route to Takoradi expressed disappointment at the situation and called on the government to pay attention to roads in mining communities.

Ahwitieso is less than five kilometers to Tarkwa and has been under construction by Asabea Construction Limited for several months now but work has halted because the contractor is yet to be paid.

It took the Police MTTD about five hours to move the broken haulage truck for traffic to flow.

The bad state of the Tarkwa to Takoradi road which is about 80 kilometres is because, trucks carrying Manganese from Nsuta and Bauxite from Awaso as well as cocoa from Western North, Amenfi and Wassa areas ply the stretch.

But analysts say such haulage trucks will continue to destroy the roads unless a proper rail system is put in place for goods to be cart to the Takoradi Port.