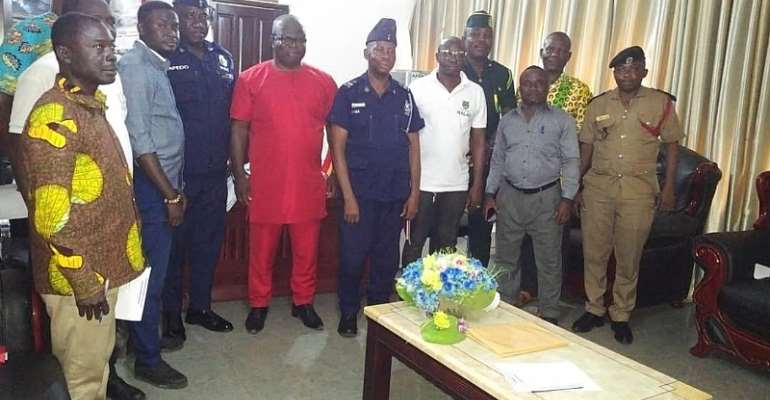 MEMBERS POSE WITH THE MCE (MIDDLE) AFTER THE INAUGURATION

An eleven-member election security task force under the chairmanship of Chief Superintendent Bright Boafo, the Atebubu-Amantin municipal police commander has been inaugurated in Atebubu.

The task force is to see to the successful conduct of the upcoming district level elections and the national referendum.

Inaugurating the committee, the Atebubu-Amantin municipal chief executive Hon. Edward Owusu who also administered the oath of office to members urged the task force to be non-partisan in its work and assured it of the assembly’s support in its activities.

The Atebubu divisional police commander Chief Superintendent Felix Apedo asked members to put their shoulders to the wheel in order to ensure a successful election urging the Electoral Commission of Ghana to be proactive in its dealings with the task force.

The chairman of the task force chief superintendent Bright Boafo said the reactivation of the committee is at the instance of the Inspector General of Police. He pledged the committee’s preparedness to work for trouble-free elections in December and beyond.

Membership of the committee comprises the municipal assembly, police, Electoral Commission, Ghana Immigration Service, the Fire Service and the Bureau of National Investigations.

Others are the National Commission for Civic Education and the Information Services Department.