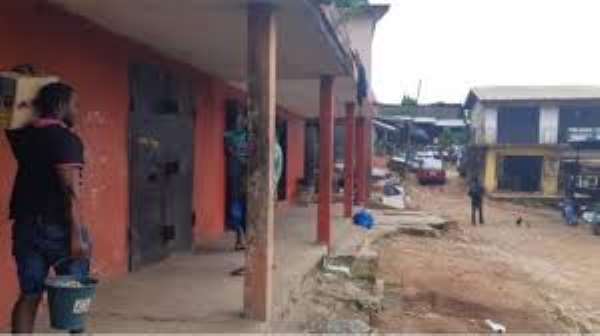 It was uneasy calm at Suame Magazine in Kumasi in the Ashanti Region as members of the Ghana Union Trade Association (GUTA) closed down shops operated by their Nigerian counterparts.

This include area such as Alabar, Acheamfour Market, Suame Magazine among others.

They also posted notice bearing the Ministry of Trade and Industry name warning store owners to stop renting their stores to non Ghanaians.

According to reports, armed police personnel were deployed to the area to maintain peace and order.

Members of GUTA told journalists the move is to halt retail businesses of foreigners after failure of government to regulate the system.

“We are tired of broken promises from Ghana leaders. Activities of the foreign retailers have collapsed our businesses because our leaders especially President Akufo-Addo will not enforce the law,” an angry GUTA member lamented.

“Foreigners doing retail business is against the law of this country. Nothing will stop us from closing down Foreigners shops today.”

Some members in an interview revealed that shops at Asawasi in the Asokore Mampong Municipality of the Ashanti Region were closed before besieging the magazine.

Police intervention caused the reopening of shops for traders at Alabar and Acheamfour but Suame Magazine shops still remain closed.

In spite of Nigerian foreigners engagement in retail, the Nigerian government has in the past weeks closed its borders to other African countries.

GUTA has lamented over the Nigerian Government action, saying its crimpling their businesses.

Nigerian High Commissioner to Ghana has attributed the closure to the illegal importation of rice and ammunitions onto the Nigerian markets.

The move according to him, is to improve the production of local content.