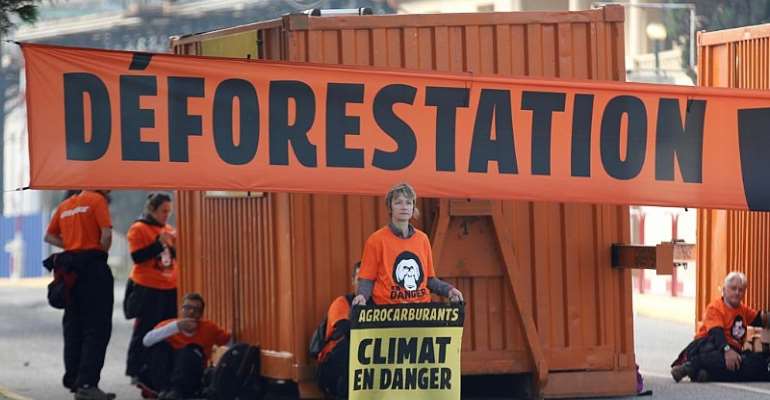 Greenpeace activists have blocked the entrance to a refinery in southern France where oil giant Total uses controversial palm oil to produce biofuel.

About 50 activists, dressed in orange, arrived outside Total's biorefinery in La Mede near Marseille at 6am local time on Tuesday.

They placed two large orange containers in front of the entrance, with some protesters chaining themselves to each one to prevent vehicles from accessing the plant.

"The refinery at La Mede is a centre of deforestation imported into France, which imports 550,000 tonnes of palm oil per year, which corresponds to 64 percent of French consumption," Clement Senechal of Greenpeace France told AFP.

Double standards
France is often held up as a climate champion for leading the fight against climate change, but Senechal accuses Macron's government of double standards in its support of companies that pollute the environment.

In addition, to releasing vast amounts of greenhouse gases such as carbon dioxide, palm oil threatens the habitat of orangutans and other endangered species, activists say.

When launching the La Mede biorefinery earlier this year Total pledged it would process no more than 300,000 tonnes of palm oil per year -- less than half of the total volume of raw materials needed and that it would be certified as being sustainable according to EU standards.

Tax breaks
It said the certification ensured there had been no deforestation to produce the oil and would result in at least a 50 percent reduction in carbon emissions compared to fossil fuels.

France's constitutional court earlier this month rejected a bid by Total to secure a tax break for using palm oil to create biofuel.