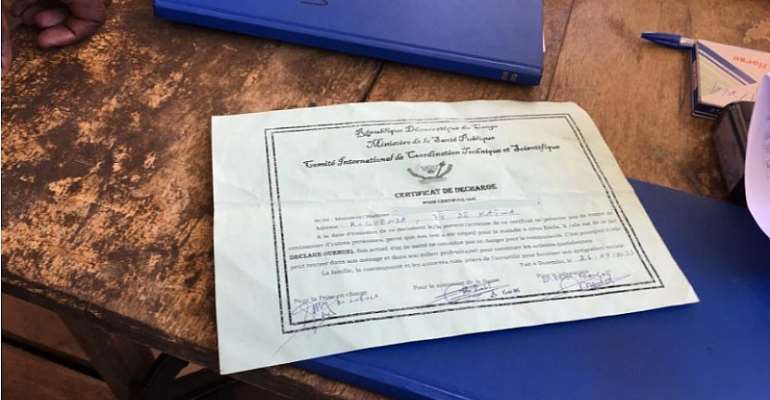 While the thousand-plus people who have recovered from Ebola in North Kivu in eastern Democratic Republic of Congo are considered fortunate, survivors may still transmit the virus through sex for up to a year-- an issue not openly discussed, especially with unmarried people, due to cultural taboos.

In Part 2 of our series on dealing with Ebola in North Kivu, DRC, RFI's Laura Angela Bagnetto speaks with survivors who are trying to return to normalcy, despite the threat of a recently-highlighted way of transmission.

Wearing a disposable yellow smock and black hairnet over her scrubs, two tiny feet poke out from each side of her body. Arlette turns slightly to show a small 11-month old baby who was brought to the childcare section of the Ebola health centre in Butembo. His mother died from Ebola, she says, and his father has been taking care of him, but he is malnourished.

At the centre, they are trying to nurse him back to health while watching to see if he has any symptoms of Ebola. This important work can only be carried out by Ebola survivors like Arlette, who have been cured of the disease and cannot transmit it again through casual contact. It also helps Arlette and her family, because she is paid for her care.

But the reality is that Arlette can transmit the disease again, through sexual contact.

She was informed of this with her husband present at the treatment centre, and told that condom use was imperative in order to prevent the virus from being passed to him for up to a year.

“The day I was discharged, before I left to go home, the psychosocial worker spoke to me and my husband, to explain why this was important, and my husband understood,” she says.

She has to go in every month for a health check, where survivors are also given free condoms each month to practice safe sex.

Safe sex for Ebola survivors
The guidelines used in North Kivu follow the WHO Advisory Group on Ebola recommendations that “male survivors of Ebola virus disease practice safe sex and hygiene for 12 months from onset of symptoms or until their semen tests negative twice for Ebola virus.”

However, health officials have decided to apply condom use across the board to both male and female survivors.

In Beni, Dr Maurice Kakule, the head of the Ebola Survivors Association and a survivor himself says that this also reflects the studies that were carried out in the aftermath of the West Africa Ebola epidemic.

“Studies show that after Ebola is cured, the virus remains in the body. In men it is in the sperm, and in women, in a number of parts of the body, notably, the genitals,” says Dr. Kakule.

“The survivors of Ebola come every month to a psychosocial clinic, and during their follow up exams we have found that the Ebola virus persists in the body… All the survivors are informed is the risk and the persistence of the virus in their body,” he says.

Working in the child health clinic with Arlette is Ebola survivor Consolée, who had some problems reintegrating into her home and neighbourhood.

“It was difficult because my family didn't want to accept me...but little by little, they have accepted me,” she says. And her husband did not have any problem in her returning home, nor in using condoms.

“We will keep using [condoms] until I am declared cured,” she says, referring to the blood tests that must be negative before they can have sex without a condom.

“They told me there is no trace of Ebola after one year, but it depends on the person. There are some who have been declared Ebola free after three months, six months. I have already been Ebola-free eight months, but they told me there is still some in my body,” says Consolée.

Condom use for everyone… even unmarried people

“You know here, husbands, and men, aren't intellectuals. It's hard to convince them to use condoms. But it's good that there are some who understand,” says Victorine.

She also handed out female condoms to wives who did not want their husbands to wear them.

“For men who actually take precautions, there's no problem, but we do have young men who make things difficult, even though they look up to the older men,” she adds.

Single Ebola survivors who have pre-marital sex can also transmit the virus, but cultural taboos prevent people from talking openly about this, especially unmarried women.

Ebola posters with graphic descriptions of Ebola symptoms including vomiting and diarrhea dot the landscape all around the North Kivu region. But one of the most important issues, according to a high official in the Butembo area who declined to be identified, is the lack of awareness among the general population that Ebola survivors can transmit the virus through sexual contact.

Consolée has been the target of neighbours who know she is an Ebola survivor.

“There is information going around, that a woman in Beni who was cured of Ebola got pregnant, and afterwards, she died,” says Consolée.

“There are those who say that among the cured, there are some who don't live long. These insults make me feel really bad, and I have to deal with this,” she says, because she worries about the future of her four children.

What is evident is that information on life after Ebola is incomplete. Ebola survivor Arlette is thankful she pulled through the ordeal, and that her husband is fully supportive of using condoms until she receives a clean bill of health.

“Using condoms is important but there are those who have been cured who are not using them,” she says. “Some women have said that they have problems with their husbands in using them, and now they are pregnant,” she adds.

Arlette reluctantly agreed to speak, but there are many single women survivors who will not openly air their views because of constraints imposed by the society in which they live.