The Deplorable State Of Sanitation In Accra 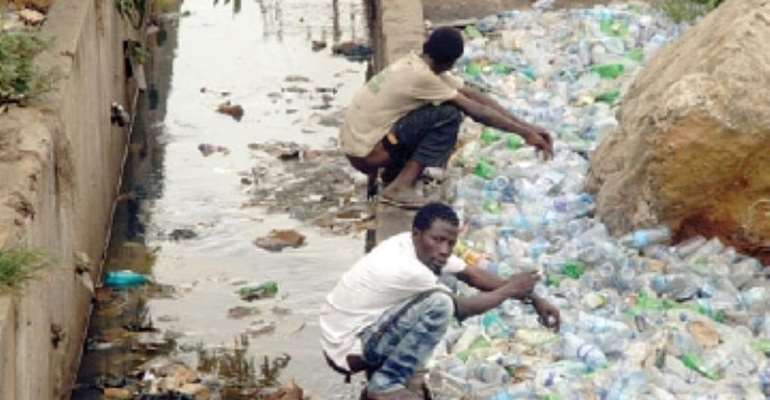 “Cleanliness is next to Godliness” is the first statement that comes to mind immediately the topic of sanitation is discussed. One can never talk about sanitation extensively without alluding to this powerful and catchy expression. Many may think that this adage emanates from the Bible but unfortunately, they are misguided because there is no scriptural reference to it. My focal goal is not to contend on its Biblical orientation but rather to trigger a conversation around a delicate issue of concern left unattended, the result we see on the streets of Accra- Ghana now.

On this note, I want to bring to the notice of the general public the terrible and downgrading nature of sanitation in the nation’s capital and how it is being swallowed by filth and dirt; a pathetic scene.

Whenever the issue of sanitation comes up it becomes a big problem for many people in Africa largely because of the loose system and institutions we have in these various countries. Many governments in Africa spend huge sums of money each year in the area of sanitation but in the end, there is no or little improvement. What could rather be the problem? Is it that the various governments are not projecting rightly? Or citizens are just not helping? I would have loved to write this issue on a global front but this piece intends to channel the discussion to Ghana and narrow it to the nation’s capital, Accra.

Sanitation in Ghana has been a headache for successive governments over the years. All efforts put in place by them yielded few or no results. When you read “The Beautyful Ones are not yet Born” by the eminent distinguished writer Ayi Kwei Armah, the issue of sanitation was being raised. Why the reference to this book? The novel was written in the 1960s during the post-independent era thus a clear indication of the prevalence of filth since time immemorial.

Ghana has been one of the safest places in the world. See 2019 Global Peace Index report. Ghana was ranked the fourth safest place in Africa and the forty-fourth in the world coming ahead of the likes of United Kingdom, the United States of America and France. Is there any reason for us to jubilate while the country is walloping in dirt? “What will we gain if we top the list of most peaceful countries in the world and we live and die in poor sanitary conditions?”

Many years ago, Kumasi uses to be the Garden City of Africa largely because of the beautiful and serene nature of the city. Is that the case now? The residents there could answer best. The news is flooded with degrading stories on sanitation in Kumasi now, and as for open defecation the least said the better!

Sanitation in Accra is something that people living in these areas have been fighting against for decades and are still battling with. The mere fact that Accra houses the first gentleman of the land is enough reason to speak against what we see now. The gutters are choked with a lot of filth and it becomes pervasive whenever it rains. The unpleasant smell from the gutters is very hazardous and injurious to those who live nearby. If you doubt, kindly take a stroll to any of our market centres. You would appreciate.

What has accounted for this seemingly endemic problem? There are a lot of factors, but this article cannot touch on all of them. One of the major factors is that of the bad attitudes of residents in these areas. Most of the people living in these areas are not discipline. Residents dump their refuse at any place and at any time especially in this era of plentiful plastic waste. Someone will clear the garbage in his or her house and wait till evening and throw them in the gutter while others do that instantly. For those who live around the sea and the lagoon, the situation is very rampant. It looks as if they have been granted a certificate to open defecation. Most of the houses in these areas do not have toilet facilities and as such people living around must defecate anywhere. People litter anyhow with great pleasure and satisfaction. The sad aspect of the issue is that the situation is not getting better any longer despite the many awareness created by the media and Accra Metropolitan Assembly (AMA).

Also, what seems to have sustained this deviant behavior of indiscipline amongst the people over the years is the lack of our law enforcing agencies to work and make the law work as well. In Ghana, there are a lot of laws, but it looks as if none of them seems to bite. I am very confident that if the laws are made workable and effective as observed in other countries, citizens will be coerced to obey the laws. The advanced countries and other serious African countries like Rwanda, Botswana and others have stringent laws on sanitation that are workable. Ghana’s position on this has always been loose and filled with pores.

Also, there exists inadequate dust bins on the roads and streets of Accra; a deviation from normal, does not justify littering. From the Victorian literature, during the Victorian era, authorities provided enough bins such that terrorists took advantage to plant bombs in the bins. Due to this barbaric attitude of these unscrupulous people, authorities had to remove some of the bins. Is the situation same in Ghana? Government authorities over the years have failed in providing dust bins on the streets which will help citizens to drop their refuse. Sometimes, someone must put a bottle in his or her bag or hold it long enough till it is disposed of in the house. However, I must say that recently authorities have tried in providing some bins to some areas. The problem now is who is accountable to ensure that it doesn’t overflow always we see on our streets. This scene is worse at weekends

At a point in time, I did not want to include this point in this piece but as a concerned citizen I cannot sit aloof and let this issue “pass by”. I think as a country it is about time, we secured rules and regulations to regulate the activities of political parties. These parties during electioneering period deface the whole Accra and its environs with a lot of posters and their party pane filaria. The sad aspect of it is that, after their party has won or lost the election, they fail to correct the sanitation mess they did. Every serious country will put measures in place for political parties to remove their billboards and posters after elections, but our country has no plans yet. This concerns both internal and external elections.

Before the 2016 general election, the candidate of the then opposition party, Nana Addo Dankwa Akufo-Addo, made a promise that when his party is voted into power, he will make sure Accra becomes the cleanest city in Africa in the first eighteen months of his administration. This promise obviously showed his level of determination to fight the problem. After successfully winning the election and came into power, this goal is still hanging and he now pleads for extension.

Many people ridiculed the president because the vision did not materialize. I was surprised to hear such comments from these people. That aside, need we be told by the president the essentials of sanitation before we put our house in order? Why can’t we as people think ahead and think outside the box to end this predicament? Ever since the president made this bold commitment, what has residents in Accra been doing? We need to be serious as people and not politicize everything we do. If Accra eventually becomes the cleanest city in Africa will the praises go to the president alone? What has the media been doing ever since the president made such a statement? Most of them are interested in NDC and NPP matters forgetting the fundamental issues of concern. The media must wake up and join this very fight as they did in fighting Galamsey.

What are the dangers of what have been discussed so far? The replications are many. During the rainy season, news headlines are flooded with flood related issues due to the rubbish we disposed of into the gutters during periods of no rain. One danger not far-fetched is the outbreak of diseases like cholera, diarrhea, and malaria as a result of mosquitoes.

What is the way forward? This is simple, the major factors (problems) that this article has raised should be taken into consideration and be solved. First, citizens must change their attitude and be disciplined and avoid the incessant dumping of refuse into gutters, on the streets, and the roads. In addition to citizens disciplining themselves, the laws of the country must also work to bring to book all perpetrators of this crime. The ministry of sanitation and the Accra Metropolitan Assembly should make sure people adhere to the rules of the game. They should liaise with some media houses and help create awareness to the citizenry and religious groups in the country. Political parties must be responsible and discipline during and after elections. The electoral commission can set out some punishment for political parties who deface the communities after their political activities. The AMA and the Ministry of Sanitation should also make it a point to provide the various streets and roads with enough dust bins to salvage the situation. This final suggestion is dear to me and I am confident that its implementation will help the country at large. I believe that if the sanitary space is given to some serious private individuals who have the expertise and resources, the atmosphere of filth and dirt will be improved. Nobody can solve our problem for us. The best may be to offer a helping hand. Residents in Accra must be responsible and discipline. The government however has a great role to play in carrying out her responsibility. Accra should not die out of the filth. Say no to dirt. Indeed, "Cleanliness is next to Godliness".