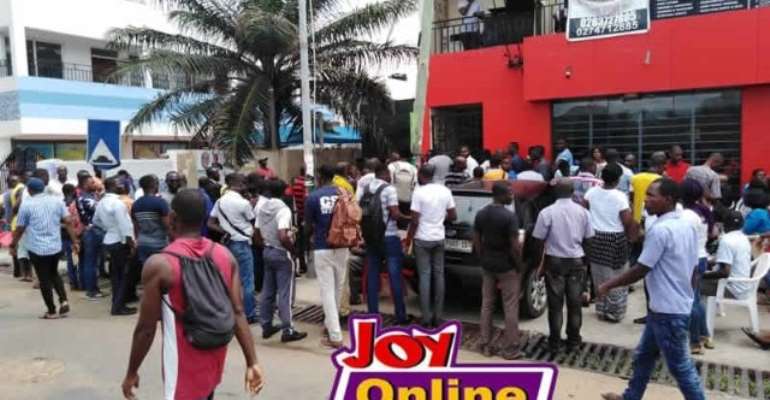 Customers of troubled gold dealer, Menzgold, have massed up at the Kumasi and Accra offices of the firm, Monday, to validate their claims documents.

Menzgold said in a statement last week that it will begin verifying claim documents from customers as part of an elaborate process to settle their locked-up funds.

According to the statement from the firm, the validation of documents regarding claims of the customers will start on October 28 from 9 am to 4 pm each day.

“All customers are expected to visit any of the respective outlets within the hours of 9:00 am to 4:00 pm each working day and submit photocopies of their Gold Trading Agreement, Receipt of Gold Traded Purchase, Gold Trading Commission Receipt, Valid National ID Copy and Evidence of Gold Re-trade(s) and Receipts or Agreements,” the statement urged customers.

On Monday, agitated customers massed at the Osu branch (in Accra) of the firm, cautioning managers of the firm to honour their final promise of face their wrath.

“In Accra customers were at Osu branch as early as 7am and joined long winding queues. Some even had to rent chairs to sit on,” reports Joy News’ Nancy Emefa Dzadosi from the scene.

Photo: In Kumasi, the Ashanti Region capital, customers converged at the Adum branch of Menzgold to begin the process to retrieve their cash.

After months of battle with government agencies over the legality of its operations, the Economic and Organised Crime Office (EOCO) secured a court order to freeze the assets of Menzgold and other related businesses belonging to Nana Appiah Mensah, CEO of the company.

Mr Appiah Mensah was detained in the United Arab Emirates (UAE) in December 2018 for allegedly defrauding a business partner after being declared a wanted man by a Circuit Court in Accra.

The detention in Dubai followed similar accusations by some 60,000 people who invested in his Menzgold firm. Many experts have described the firm as a Ponzi scheme.

In July this year, Nana Appiah Mensah returned home after it was reported that he had won the case and was released from detention.

His return to Ghana was heralded as a major relief for customers who invested huge sums of money in his gold trading business after it was alleged that he was awarded some $39 million after the Dubai litigation.

Mr Appiah Mensah was charged with fraud upon his return to Ghana.

His customers, thousands of them, have been pushing for government intervention to stop the court proceedings over the fraud allegations.

They believe the court process will scuttle Menzgold’s efforts to pay their locked up investments.

The aggrieved Menzgold customers believe that a special committee made up of customers, government officials and Menzgold management will bring finality to the matter.