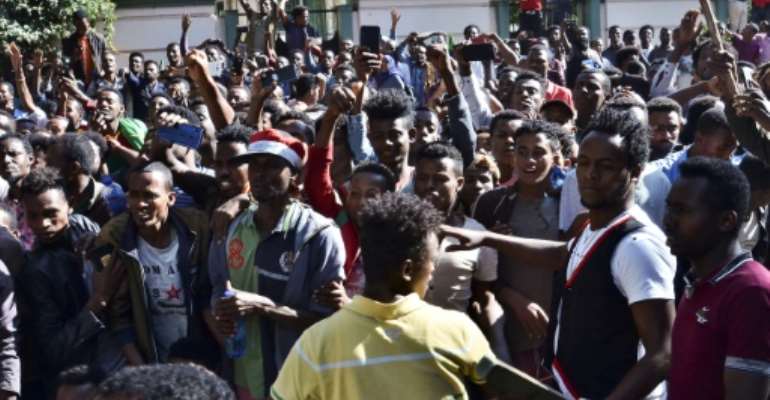 The deadly religious and ethnic violence was sparked by an activist's claim that security forces were planning an attack on him. By STRINGER (AFP/File)

Violence erupted in the capital Addis Ababa and the outlying Oromia region on Wednesday after a prominent activist accused security forces of trying to orchestrate an attack against him -- a claim police officials denied.

It quickly morphed into clashes and a police official said Friday that 67 people had died in Oromia.

"People are dying and questions are being raised if the government even exists. The people are losing all hope," Father Markos Gebre-Egziabher, a leader in the Orthodox Tewahedo Church, told AFP following a memorial service at Holy Trinity Cathedral in Addis Ababa.

Abiy, the winner of this year's Nobel Peace Prize, waited until Saturday night to react. He vowed to bring perpetrators to justice and warned that instability could worsen if Ethiopians didn't unite.

A church spokesman told AFP on Saturday that 52 Orthodox Ethiopians, including two church officials, had been killed -- a toll that AFP could not independently verify.

Fisseha Tekle, a researcher for Amnesty International, said Saturday that Orthodox churches had been attacked in at least three locations, while there was at least one report of a mosque being targeted.

At Sunday's memorial service in Addis Ababa, hundreds of worshippers bowed their heads during a moment of silence for the victims.

Father Markos said members of the church were prepared to die in defence of fellow worshippers and church property.

"If they come with machetes, we will go with crosses," he said. "God is with us."

"The duty of the government is to protect its citizens, more than development and other things," he said. "Currently we're not seeing that happening."