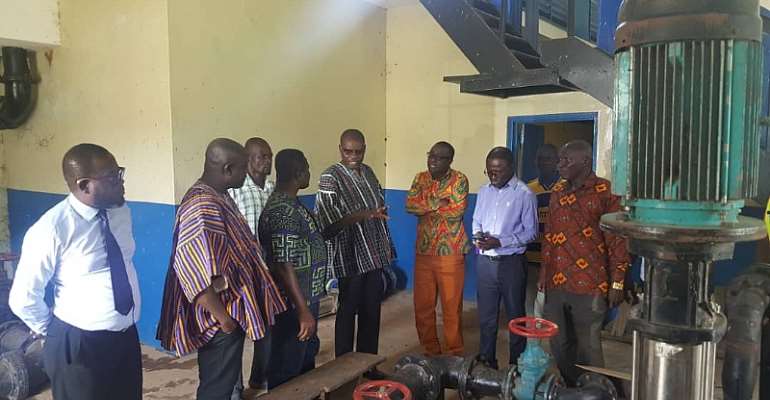 The Managing Director of Ghana Water Company Limited, Dr. Clifford Braimah together with engineers from the company, has paid a working visit to Salaga to inspect the rehabilitation and expansion of the Salaga water system ongoing in the area.

The rehabilitation works include laying of new pipelines, mounting of overhead tank and construction of a booster point at Nkwanta.

Over 5 million Ghana cedis has so far been spent on the project.

Interacting with the media after the tour, Dr. Clifford lamented over the construction of a supposed booster station in 2015.

He said the project which cost the taxpayer over Ghc200,000 was poorly constructed.

He revealed that the entire project will have to be pulled down for a new one to be constructed.

"I don't know the engineers they consulted but I tell you the project is nothing to work with. The plan, design, construction everything is bad," he lamented.

He said the company is working assiduously to resolve the perennial water situation in Salaga and its environs.

The team first visited the pumping station where new pipelines were being laid.

Dr. Clifford also met with farmers whose farms were affected as a result of the construction work.

He assured them of compensation from the company after accessing the extent of damage caused to their farms.

"I am satisfied with work done so far and I believe when the project is completed, Salaga and it environs will say bye-bye to water problem"

The MP for the area, Adam Salifu Braimah applauded Ghana water company for choosing Salaga as one of the beneficiaries of the project.

"Nana Addo promised to solve the water situation when he visited, hopefully it is coming to an end"