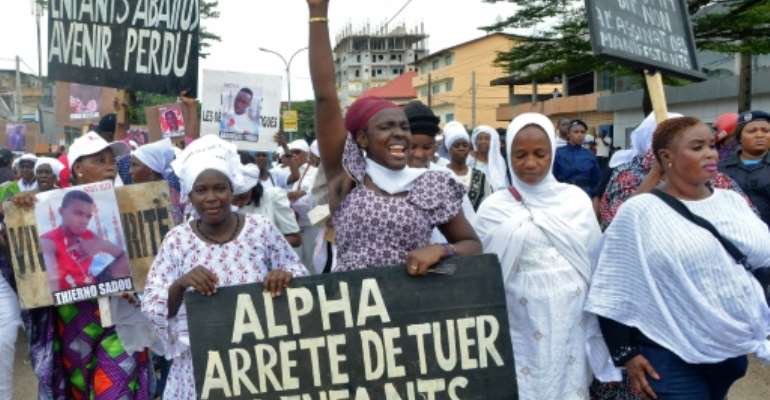 Tens of thousands of protestors marched in the Guinean capital of Conakry on Thursday in the latest round of demonstrations against President Alpha Conde, accused of trying to circumvent a bar on a third term in office.

The march -- which organisers claimed to have a million participants, a figure that could not be verified independently -- unfolded peacefully after previous protests that led to deadly clashes, an AFP reporter saw.

Police mobilised in large numbers but kept a low profile.

Many demonstrators wore red to symbolise the death of people in protests last week. The opposition says 10 were killed, while the authorities put the toll at eight, plus a gendarme.

"We are tired of the lies, the false promises, and above all the fact that he (Conde) is no longer capable of meeting the expectations of the people. Ten years in power is long enough," said Souleymane Kamagathe, a baker.

On Tuesday, a court in Conakry handed down a 12-month jail term to Abdourahamane Sanoh, coordinator of the National Front for the Defence of the Constitution (FNDC), an alliance of opposition groups that is behind the protests.

Four other leaders were sentenced to six months.

They were found guilty instigating a wave of unauthorised protests on October 14 that brought much of the West African state to a standstill.

The unrest has been stirred by charges that Conde, 81, plans to change the constitution to overcome a ban on seeking a third term in office. Elections are due in 2020.

He has neither confirmed nor denied his intention to seek a third term.

Conde, a former opposition figure who was jailed and spent time in exile under Guinea's previous authoritarian regimes, became the country's first democratically-elected president in 2010.

But critics say his rule has become increasingly authoritarian. About 100 demonstrators have been shot dead by police since he came to power, according to the opposition.