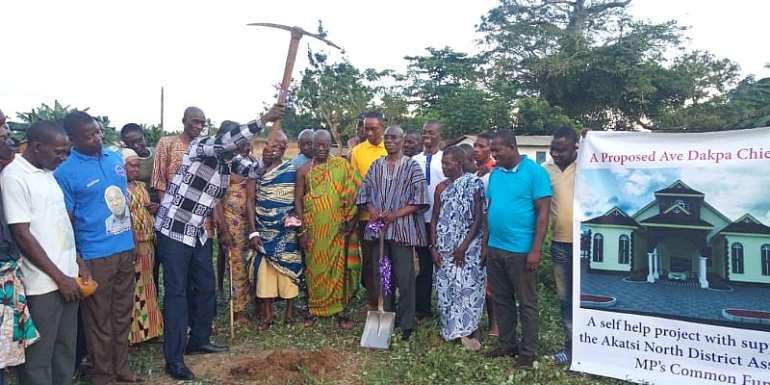 Following two earlier sod cutting events at Kpeduhoe and Afiadenyigba for the construction of some classroom blocks on Monday, Hon. Peter Nortsu-Kotoe (MP) and Dr. Prince Sodoke Amuzu (DCE) of the Akatsi North Constituency/District moved to Ave Dakpa to cut sod for the start of the construction of a Chief's palace for the Chiefs and people of Ave Dakpa.

The project which is expected to be completed ahead of the 20th Anniversary of Ave Bliza (annual festival of the people of Ave), to be hosted by Ave Dakpa in April 2020, is an initiative by the community which is seeing support from the MP and the DCE.

The two at a short ceremony held on Monday, assured the chiefs that they are ready to combine efforts towards the completion of the project and for that matter, the development of the Ave community.

The MP said "We are here for the development of the area, it's been seven years since the creation of the district and it's imperative we work to uplift the status of the area. We have done a lot but we can't do everything, so we are looking at things that would give us the best of facelift."

He said the building of the palace is to give the chiefs due recognition for the roles they played towards the creation and development of the district/constituency.

"We don't have streets because of our layout years before today, I'm not sure our forefathers had any dream that Ave Dakpa would ever become a district capital. At this our time, it is our responsibility to put things right.

It's for this reason that we need to give the necessary respect and support to our chiefs, that's why we are here to support the building of a place befitting enough for them", he noted.

Hon. Peter Nortsu-Kotoe added that, the district has no single befitting palace at the moment, a situation that has forced him to assemble Chiefs in his personal residence at some points when former President Mahama visited the area.

"The idea of bringing President Nana Addo to the 20th anniversary in April next year, is one of the reasons why we have to move quick to put up a nice place for our Chiefs, where they can receive the President", he added.

The DCE further stated that the assembly has begun moves to create access routes to the site and through other areas of the town.

He urged the town folks to give all the necessary support to the contractors towards the execution of the project.

On the part of the chiefs, the Paramount Chief of the town and President of the Ave Council of Chiefs, Torgbui Nyamekor Glakpe V, thanked the two sons for their commitment towards the development of the district.

He urged the citizens to emulate the unity being exhibited by the two political leaders saying, "these two don't behave NDC or NPP, they are one because the DCE is a son to the MP".