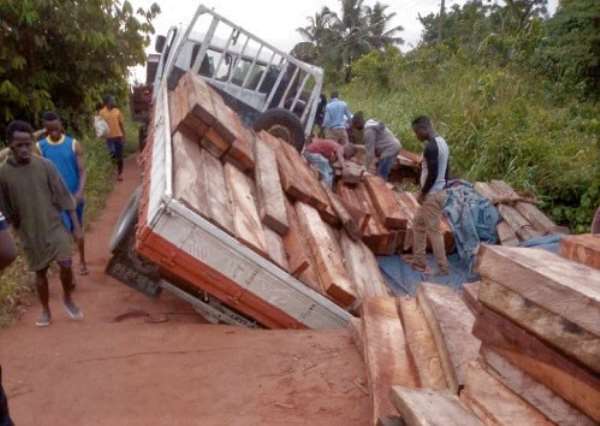 A portion of the 97-year-old concrete bridge over the Boyor River at Breman Kuntanase in the Asikuma Odoben Brakwa District in the Central Region has been damaged.

The bridge, which was constructed in 1922 and looked very weak, caved in at about 4 a.m last Sunday when a KIA Rhino truck with registration number GW 6827-18 that was carrying timber beams and travelling from the Asikuma direction and heading towards Swedru was crossing over.

A part of the truck got submerged in the river and it took some youth in the town sometime to unload the beams and pull the truck out.

Communities cut off
With the bridge partially destroyed, many communities in the district that use that stretch of road and are, thus, connected have been delinked.

Commuters from Agona Swedru, Agona Nyakrom, Agona Nkum, Agona Otsenkorang, Agona Odoben and Kuntanase, and other communities adjoining Breman Asikuma on the other side of the bridge have been left stranded.

Passengers have to alight at one end of the bridge and cross over to join waiting vehicles at the other end before reaching Swedru or Asikuma.

People travelling to Asikuma, who do not want to go through the hustle at Kuntanase, now have to go through a long winding route through Agona Odoben to Brakwa, Kokoso, Jamra and Benin before getting to their destination.

The Asikuma Odoben Brakwa District is well noted for the cultivation of many agricultural produce such as cocoa, cassava, vegetables, oil palm and plantain among others, as such, the bridge, due to its strategic location, facilitates the carting of farm produce to market centres.

The collapse of the bridge, therefore, would undoubtedly make it very difficult for farmers to transport their produce to Swedru, particularly on Mondays, which are market days in the town.

Similar incident
It would be recalled that on September 17, 2019, the Daily Graphic published a story on the collapse of a concrete bridge over River Okye on the Breman Asikuma-Akyem Oda road.

That bridge, which was also weak, collapsed when the river overflowed its banks and is yet to be reconstructed.

As a result, several communities in the Asikuma area, as well as in places such as Oda in the Birim Central District and Akyem Swedru, Akyem Awisa and Akyem Achiase all in the Birim South District in the Eastern Region, have been cut off.

Immediate temporary remedy
Because of the crisis, drivers from Swedru and Asikuma have created stations at both ends of the collapsed bridge as a temporary measure to transport passengers and their goods to their destinations.

Even though the situation has not come with increment in transport fares, it has brought difficulty to passengers who have to carry their luggage from one side of the bridge to the other to continue their journey.

Several appeals
The immediate past Assembly Member for the Kuntanase Electoral Area, Mr Ebenezer Appiah Mensah, who spoke to the Daily Graphic, said the bridge over the Boyor River had been weak for the past four years leading to its state becoming critical about three weeks before the destruction.

He said before the last assembly was dissolved, he had made several appeals to it to take steps to either repair or reconstruct the bridge since it had developed serious cracks.

He said a danger sign was subsequently mounted on the bridge to warn drivers of heavy-duty trucks to desist from using the road but some drivers refused to heed the warning leading eventually to the destruction.

He called on the government to take immediate steps to reconstruct the bridge and also develop the main road in order to make transportation easy, as well as enhance economic activities in the area.

The Chief of Kuntanase, Nana Odum Essilfie III, urged the government to undertake inspection of bridges regularly as a means to identify weak ones and have them repaired or reconstructed.

The District Chief Executive for the area, Mr Isaac Odoo, and some technical staff from the district assembly, have since visited the scene to gather first-hand information about the incident and given an assurance that the problem would be given the needed attention.

In an interview with the Daily Graphic, some commuters expressed concern about the lack of a maintenance culture in the country and wondered if the district assembly had been unaware of the condition of the bridge before the inevitable happened.

“The government must query the whole district assembly, including the district chief executive,” one unhappy commuter said.