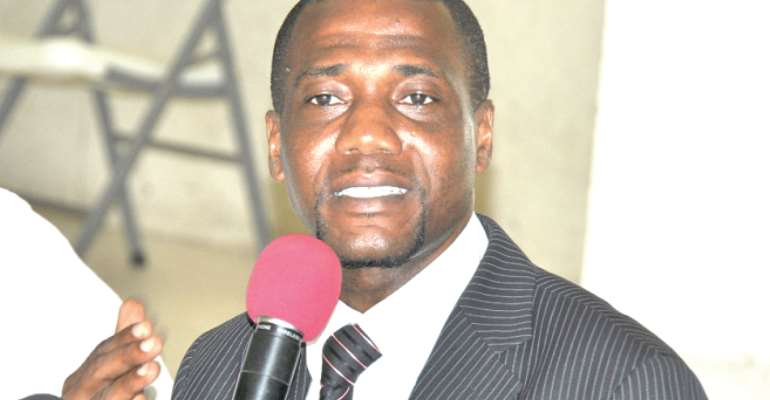 The Independent Presidential Candidate in 2012 and 2016, Jacob Osei Yeboah has observed that the agitations by the recent law students give hope that the new crop of students is tired of the corrupt, weak and outmoded fantasies of the Judiciary System.

“This is not an option but the cancer that should be cured conscientiously,” he said in a release copied to this portal.

Jacob Osei Yeboah popularly called JOY2012 indicated that “Respect of the Law is one of the building blocks of democracy. The Anas exposé, the undue delay of justice, vigilantism, selective justice, the unprovoked killing of security personnel and the brute force of Security personnel against innocent citizens, are nature’s wonderful ways of warning Ghana that we need to have a critical look at reviewing our Judiciary Systems Now.”

"According to law, it is the Judiciary that is responsible for administering justice. Our judicial system is a key aspect of our democratic way of life. It upholds peace, order and good governance. Citizens (not idiots and tribes people) look to the judiciary to uphold their rights and governments look to the courts to interpret laws.

"The role of the Judiciary as the guardian-protector of the 1992 Constitution and the fundamental rights of the people makes it the organ of government that facilitates a functional democratic society," he emphasised.

He stated that one would have expected that with H.E. Nana Addo Danquah Akufo Addo, a lawyer at the helm of affairs, supported by his cousins, Mrs Sophia Akufo (Chief Justice) and Ms Gloria Akufo (Attorney General), Ghana was to experience the transformation of the judicial system. Be minded that the aforementioned individuals are all related to J.B. Danquah of blessed memory who was nicknamed, “the Don of Ghanaian Democracy”.

“The British who are the root of Ghana’s Judiciary System have transformed through innovation to the devolution of graduation and qualification to the Bar. They have also shifted from the focus on their traditional aristocratic outlook with wigs to the core competence of justice delivery. Some former British colonies in Africa like Kenya have contextualized the Judiciary System to their respective nations,” he explained.

His comments below:
However, sixty-two (62) years after Ghanaian Independence, the General Legal Council (GLC) is failing to contextualize the Judiciary System in Ghana. There is abysmal suffocation of application of old laws that incarcerate a thief of a bag of maize for two years but free the billion-cedi corrupt official.

Ghanaians were joyful in 2018 that the family trio of legal luminaries would bring transformative agenda in the judicial system and tackle the weaknesses of the 1992 Constitution with amendments to commensurate the slogan of NPP, “Ghana will work again”. But alas! How wrong Ghanaians were!

The trio are overseeing a referendum that seeks to amend ONLY article 55(3), ignoring the humongous costs it will bring to the Ghanaian when they could easily have expanded the number of articles the referendum could correct. Why waste resources and agitate the amendment of the 1992 constitution to serve super incompetent myopic agenda. How can Nana-Bawumia NPP Government have the audacity to look into the eyes of Ghanaians and call former President John Mahama, incompetent and *wasteful of Ghanaian purse, and turn around to spend hugely on referendum to ONLY amend a single article of the 1992 constitution?* Former President Rawlings should be bold to tell Ghanaians again, is this the best Government he predicted Ghana was going to have? Better than he Rawlings’ government or Kuffour’s or Atta-Mills’ or Mahama’s!?

The office of JOY2012 is throwing a challenge to any former President, any Religious Leader, any Traditional Leader, any business leader and any professional to justify the wisdom of this referendum on 17th December, 2019, to change a single article 55(3) of the 1992 constitution that has been crying for amendments since 2002.

The loud silence of the Ghana Bar Association (GBA) in matters of the law such as this is the product of innovative law students being mesmerized, the impotence of the GLC to give direction in such matters and corrupt Judiciary System and invariably Dysfunctional Democratic Society in Ghana. GLC, give life to Law Students and give life back to Democracy in Ghana!!

We must (government) endeavor to transform the Judiciary System in Ghana to give life to a functional democracy. This referendum is a litmus test for the NDC to affirm what their founder said they know they will lose 2020 elections or they are different from NPP. We should not allow the Nana-Bawumia government to sneak this referendum through but aptly resist it like the CSE by all especially our Chiefs and faith-based communities.

All prudent citizens, transformational law students, legal practitioners and responsible oppositions should Vote a Big NO on 17th December, 2019 to send the signal to the government of Nana-Bawumia that, yes we want to elect our MMDCEs but we want a referendum to amend the 1992 constitution and not ONLY article 55(3).