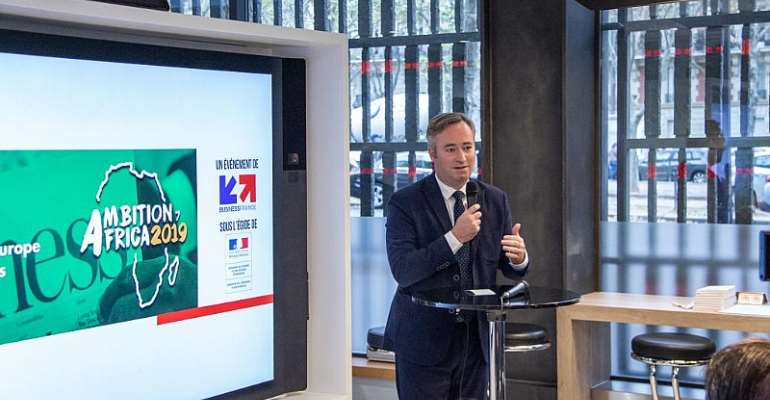 The French government is stepping up efforts to strengthen ties with the African continent in the run-up to a key business forum at the end of the month. Africa's leading European trading partner wants a win-win cooperation without historical baggage.

France "wants to build with Africa," the words of Jean-Baptiste Lemoyne, French Minister of State for Europe and Foreign Affairs, speaking at a press conference Tuesday, outlining the second edition of Ambition Africa.

The government initiative launched last year, aims at boosting trade between France and Africa, which has seen a surge of foreign investors scrambling to do business.

The World Bank predicts that the GDP growth rate for Sub-Saharan Africa will reach 3.4 percent this year, up from 2018. And in the past 8 years, annual growth on the continent has climbed to 7 percent, exceeding the global growth rate.

"Africa's potential is obvious," Lemoyne continued. "Our destinies are linked by a range of factors: climatic, commercial (...) either we succeed together, or we don't succeed at all," he insisted."Ambition Africa is one means."

The project, which enters its second year, was presented Tuesday in Paris at the national agency Business France, in charge of promoting French companies abroad.

The continent is expected to account for 2.5 billion inhabitants, and France, like its competitors, is keen on capitalizing on this demographic dividend.

However, French authorities insist their approach is hinged on local development.

"The African people want to be a major actor of their own development and not only to be a consumer (...) we are not just there to sell our products.This is the French approach," Baroux told RFI.

More than 6,300 French companies are currently doing business on the continent and employ some 650,000 people.

Projects like Ambition Africa are part of President Emmanuel Macron's drive to reset Franco-African relations, and distinguish them from the colonial networks of "La Françafrique." Still, there are concerns that this French interest may come with strings attached.

"The idea now is to really organize partnerships between France and Africa. It's not only a question of commerce, it's a question of cooperation, and migration as well", he says, amid warnings that Africa's burgeoning youth could be a ticking time bomb for Europe, if not provided the right opportunities.

"It's a question of development, and we want to be near our African neighbor, to develop, not to help them but to develop with them their own continent,” Baroux said.

French companies like Coppernic are taking this message on board. The tech firm specializing in mobile solutions is helping African nations to build up their ID infrastructure.

"The World Bank says that 1.1 billion people have no legal identities, they have not been registered. That means they have no access to elections or social programs," Jacques Le Cuivre, the director of Coppernic.

The firm has registered hundreds of Africans using a new multifunction biometric tablet, that takes only four fingerprints.

"We strongly believe that it will be a game changer for the massive enrolment campaigns that many African countries will have to run in the next few years in their elections," Le Cuivre told RFI.

Stories like that of Coppernic's are what the French government is looking for to illustrate that its interest in Africa is indeed a win-win development and not a new form of colonialism.