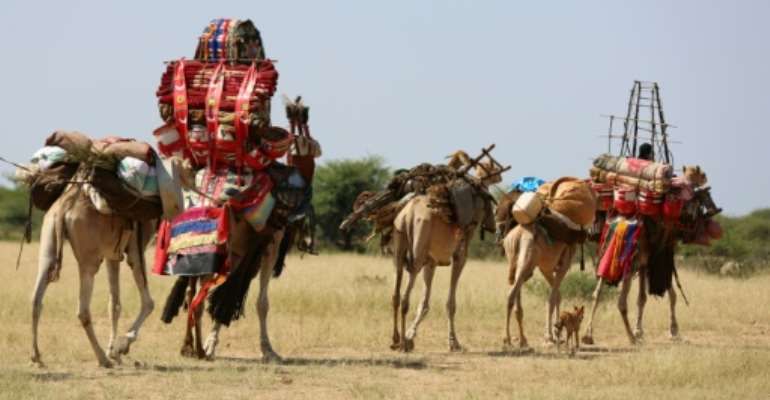 Sudanese villagers carry belongings on camels in the Darfur village of Shattaya following their return home last year after more than a decade of being displaced by war. By ASHRAF SHAZLY (AFP)

Sudanese farmer Suleiman Yakub vividly remembers the day he was hung from a tree and left to die by Arab militiamen who attacked his village in Darfur, killing, looting and burning.

"Villagers were executed in front of me," said Yakub, 59, a resident of Shattaya village, which was attacked by the notorious Janjaweed militia in February 2004 when the conflict in Sudan's western region of Darfur was at its peak.

"I was handcuffed and hung from a tree with a rope around my neck, but I survived," he said, showing the scar on his neck. "We still don't feel safe."

The fighting in Darfur erupted in 2003 when ethnic African rebels took up arms against Khartoum's then Arab-dominated government of now-ousted leader Omar al-Bashir, alleging racial discrimination, marginalisation and exclusion.

Khartoum responded by unleashing the Janjaweed, a group of mostly Arab raiding nomads that it recruited and armed to create a militia of gunmen who were often mounted on horses or camels.

They have been accused of applying a scorched earth policy against ethnic groups suspected of supporting the rebels, raping, killing, looting and burning villages.

The campaign earned Bashir and others arrest warrants from the International Criminal Court (ICC).

About 300,000 people have been killed and 2.5 million displaced in the conflict, the United Nations says.

Thousands of peacekeeping troops from a joint UN-African Union mission were deployed in 2007 to curb the conflict, but their numbers have been gradually reduced since mid-2018 as the conflict has subsided.

Many Shattaya residents, like Yakub, have tentatively started to return to their homes, made of mud brick and thatch, after living in run-down camps for years.

Their village was one of those that faced the brunt of the attack unleashed by the Janjaweed in the early years of the conflict.

Residents say about 1,800 villagers were killed when gunmen on horses, camels and motorcycles tore through the village, firing guns and rocket-propelled grenades.

The Hague-based ICC has charged Bashir with war crimes, crimes against humanity and genocide for abuses in Darfur, including for atrocities committed in Shattaya.

Many Shattaya residents have tentatively started to return to their homes, made of mud brick and thatch after living in run-down camps for years. By ASHRAF SHAZLY (AFP)

Bashir was ousted by his army in April after months of nationwide protests against his iron-fisted rule of three decades.

But tensions remain over land ownership in Darfur, and those responsible for the war's darkest years have not been brought to justice.

Sudan's new authorities who came to power after Bashir's overthrow have vowed to end the conflict in Darfur as well as in the states of Blue Nile and South Kordofan.

They are holding peace talks this week in Juba, the capital of South Sudan, with three rebel groups who fought Bashir's forces in these regions.

After more than 15 years, the brutality unleashed on Shattaya, whose residents are mainly from the African Fur tribe, is still evident.

Most houses in Shattaya are severely damaged and charred, with residents who have returned living in make-shift shelters, an AFP correspondent who visited the village reported.

The road to Shattaya is unpaved and dusty, and riddled with pools of muddy water.

Villagers complain that armed men are still in the area, and that lands confiscated by Arab pastoralists have not been returned.

"We have not got back our farm," said Mohamed Izhak, 29, who claims his family owned a lemon and orange orchard on the outskirts of the village.

Izhak returned to Shattaya last year, after living in a camp for years alongside tens of thousands of people displaced by the conflict.

Izhak said his father, two brothers and three uncles were killed in the 2004 attack.

"We don't feel safe, even now... we are unable to build proper homes, we are living in small shelters made from plastic and dry grass."

Haj Abdelrahman, 63, lives in a room that survived the destruction of his home.

Sudanese villager Siddiq Youssef checks the remains of his house which was burnt 15 years ago in the village of Shattaya one of several in the Darfur region that faced the brunt of the attack unleashed by the notorious Janjaweed militia. By ASHRAF SHAZLY (AFP)

When he returned to Shattaya, he found Arab pastoralists occupying his family's farm.

"The farm is destroyed, they have cut the trees," Abdelrahman told AFP, adding that he was wary of talking to the pastoralists "because they are armed".

"They are not stealing our livestock anymore, but if they are not disarmed we will not feel fully secure. We also want our land back."

Many villagers are planting vegetables just outside what is left of their houses, hoping that one day they will get their farms back.

"I have my farm outside the village, but I cannot go there because I don't feel safe," Siddiq Youssef told AFP.

"If those militiamen are not disarmed, then we can't have peace. We are scared even now when we see them."