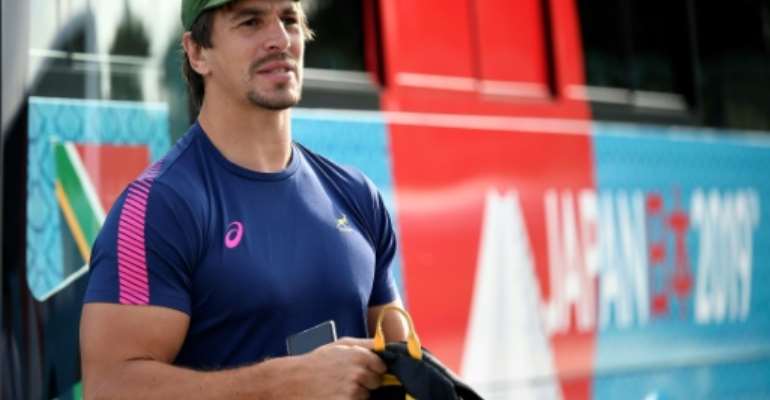 Eben Etzebeth is accused of racist slurs and assault. By Filippo MONTEFORTE (AFP)

South Africa's rugby star Eben Etzebeth is taking the country's rights watchdog to the High Court over racial abuse charges against him, the body said Monday.

The 27-year-old Springbok is accused of using racist slurs against four men in August in the town of Langebaan, about 120 kilometres (74 miles) north of Cape Town.

He is also charged with assault after allegedly insulting, assaulting and pointing a gun at a 42-year-old homeless man.

On the same day Etzebeth played in South Africa's World Cup win over Italy in Japan earlier this month, the South African Human Rights Commission (SAHRC) formally lodged an application against him in equality court.

On Monday -- less than a week before South Africa's clash in Japan -- the SAHRC said it had received an application from Etzebeth for the High Court to review the case and "set aside the commission's decision to institute proceedings against him in the equality court".

The commission added that it was deciding how to respond to the application.

SAHRC's acting legal head Buang Jones previously said "we are sending a clear message with the case that the 'h' word falls into the same category as the 'k' word" - a reference to 'hottentots', a derogatory word for people of mixed race, and 'kaffir', another term of abuse.

The complainants, who are calling themselves the 'Langebaan Four', want financial compensation of more than one million rand ($66,505) for damages.

They also want Etzebeth to undergo a restorative process which includes an apology, anger management training and community service in Langebaan.

The 82-Test lock has maintained his innocence.