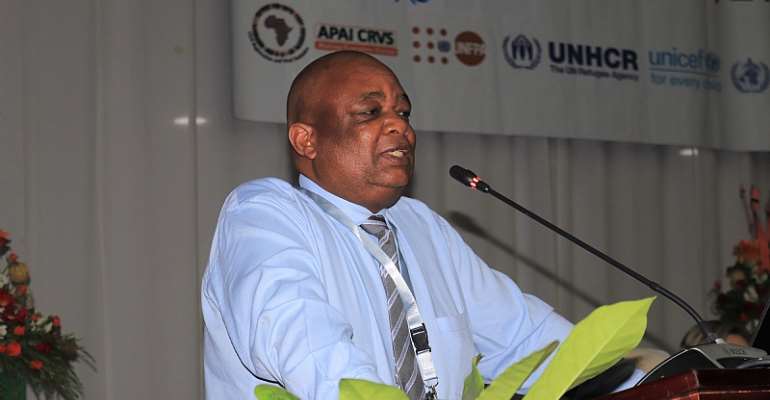 The Economic Commission for Africa (ECA) presented the report pursuant to ministerial declarations and the status of Civil registration and Vital Statistics (CRVS) in Africa, following the official opening ceremony of the 5th Conference of African Ministers responsible for CRVS.

William Muhwava, Chief of Demographic and Social Statistics Section, African Statistics Centre at the ECA, presented the report and outlined the various meetings that have been held prior to the 5th conference on CRVS. He pointed out that “the First Conference of African Ministers, held in Addis Ababa in 2010, recognized CRVS as a development imperative for Africa and made clear commitments to improving it in their countries. At the second Conference, held in Durban, South Africa, in 2012, the Ministers recommended specific and practical steps for achieving complete and efficient CRVS systems. The third Conference was held in Yamoussoukro, Côte d’Ivoire on 12 and 13 February 2015 and the Fourth Conference was held in Nouakchott, Mauritania, on 7 and 8 December 2017”.

The 5th Conference provided a platform to present through the report key achievements and progress made. The first achievement has been the Institutionalization of the Conference of African Ministers as a standing forum of the African Union Commission. This was approved during the nineteenth ordinary session of the Assembly of Heads of State and Government of the African Union, held in Addis Ababa in July 2012.

The second achievement is the formation of Regional Core Group(APAI-CRVS) on civil registration and vital statistics. According to the report, APAI-CRVS is supported by the Regional Core Group on CRVS, formed by key actors on the continent. This first meeting tasked the three pan-African institutions, namely, the Economic Commission for Africa (ECA), the African Union Commission (AUC) and the African. Development Bank (AfDB), with supporting APAI-CRVS and called upon other development partners to take part in the regional initiative. The Regional Core Group is intended to harmonize approaches, harness synergies and thus help to avoid duplication of effort, as well as providing technical and financial support.

This objective was reinforced by the need to promote collaboration between key actors of national civil registrational and vital statistics systems. To this effect, the third and fourth Conference of African Ministers, held in Cote d’Ivoire and Mauritania, were attended by the Ministers of Health of several member states and contributed to strengthening the partnership between the civil registration offices and ministries of health.

Despite progress made, the report pointed out challenges met in the implementation of the CRVS programme. First and foremost, funding for APAI-CRVS, sourced largely from development partners, has been inadequate and ad hoc in nature. The unpredictability of resources has affected its smooth

implementation, including sustaining the human resources required to run the APAI-CRVS

secretariat. Further to that, many countries lack the mechanisms and capacity to routinely monitor the performance of their civil registration systems, and they cannot therefore adequately report on the

improvements emerging from their interventions.
The report concluded that now that more than half of the countries have conducted their assessments and many have developed their plans, it is crucial to support and guide countries in the implementation

of their plans and ensure that the plans adopted can bring about real sustainable change. The 5th conference of Ministers aims to provide strategic and policy guidance on pathways towards holistic, innovative and integrated civil registration and vital statistics (CRVS) and digital identity management systems to help close the identity gap in Africa where more than 500 million people have no legal identity.